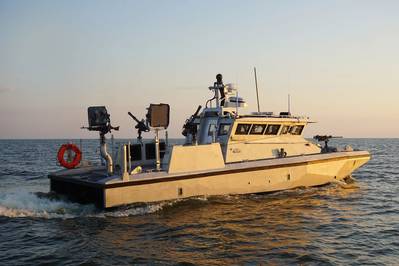 The United States is providing Ukraine with a range of defense articles, including 23 welded-aluminum military vessels built by Louisiana-based Metal Shark, to help Ukraine to better protect its coastline, waterways and ports.

Last week it was announced that six of the U.S. Navy’s new 40 PB maritime combat vessels would be sent to Ukraine as part of a $450 million security assistance package. Built by Metal Shark and delivered to the Navy in 2021 as part of a currently active defense contract for 50 vessels, these next-generation vessels feature ballistic protection as well as six MK 16 weapons foundations plus a large forward foundation for stabilized, remote operated, optically guided MK 49 / MK 50 weapons systems.

The boats are being built and delivered as part of a long range foreign policy strategy years in the making, but recent events in Ukraine have caused an acceleration of the timelines. As a result, vessels will begin shipping immediately, Metal Shark said.

“Metal Shark has been working closely with the US Embassy in Kiev since 2019 to develop the strategy now being implemented to support Ukraine’s maritime capabilities, so it is fulfilling to see that the vessels will arrive when they are most needed,” said Henry Irizarry, Metal Shark’s Vice President of International Business Development. “Metal Shark provides next-generation, proven platforms to partner nations, but most importantly, we create long term partnerships with end users to train boat crews and provide seamless technical support to assure 24/7 operational readiness.”

“We have built an efficient production machine capable of delivering high quality, next-generation military vessels, faster, and at higher volume, than anyone else in the business,” said Metal Shark’s CEO Chris Allard. “From Ukraine’s new 40 PB maritime combat vessel to its close cousin, the Long Range Unmanned Surface Vessel we’re building for the US Marine Corps, Metal Shark stands ready and able to support our warfighters with game-changing lethality, delivered via conventional or unmanned platforms, anywhere in the world, whenever needed.”