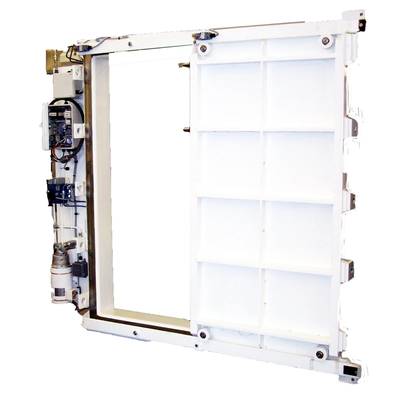 AdvanTec Marine said its USA Sliding Doors division has been awarded a contract from Seaspan Shipyards to supply Fire-Rated, Class II and III Watertight doors for both Joint Support Ships (JSS) that Seaspan is building for the Royal Canadian Navy under Canada’s National Shipbuilding Strategy.

The order includes USA-1005 Cargo Doors and the USA-1003 Personnel Doors. Both models have remote (wheelhouse) and local controls, both electric, while the drive system is electro-hydraulic. In the event vessel power is lost, a local manual handpump is also provided as a failsafe feature. An Indicating Station on the bridge provides open/close status, safety lights, and alarms in the event of emergencies or ship system failure.

AdvanTec said it will complete the supply of the 15 doors to Seaspan this year.

The 173.7-meter JSS will be purpose-built, multi-role vessels that provide an auxiliary function to the Royal Canadian Navy, including the replenishment of naval task groups with marine fuel and other provisions at sea. The two ships are scheduled to be delivered in 2023 and 2025.

USA Sliding Doors, part of AdvanTec Marine since 2019, said its doors are used by navies around the world, including the U.S. Navy for its T-AKE, MLP/ESB, T-AGM and T-A0 class vessels.