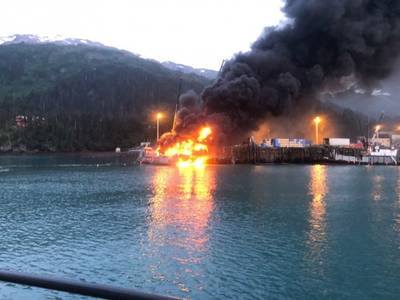 Coast Guard crews have suspended the search for one person missing after an explosion and subsequent fire at Delong Dock in Whittier, Alaska, Monday.

The explosion reportedly occurred on a fixed barge, and the fire spread to the pier and then to the Alaganik, a 99-foot commercial fishing vessel that was initially reported to have two people aboard at the time of the explosion. Whittier Police Department personnel have since confirmed one of those two is safely aboard a different vessel en route to Whittier.

Sector watchstanders issued a Safety Marine Information Broadcast that established a 100 yard safety zone to keep vessels a safe distance from the fire while the crew of the Chandeleur launched in response to help maintain the safety zone and conduct a search.

The fishing vessel and barge sank in 85 feet of water at the pier with a potential maximum of 5,500 gallons of fuel oil aboard. The fishing vessel owners have contracted Global Diving and Salvage for clean-up and salvage efforts.

“The Coast Guard committed all available resources in conducting this search effort," said Cmdr. Mark Kuperman, Coast Guard Sector Anchorage deputy commander and the search-and-rescue mission coordinator for the search. "Our thoughts are with the family and friends who were impacted by this tragedy.”

A Coast Guard MH-60 Jayhawk helicopter crew, the crew of the Coast Guard Cutter Chandeleur and volunteers aboard Coast Guard Auxiliary Boat 336 conducted the search across approximately 12 square miles over the course of 17 hours.

The Coast Guard has conducted a next of kin notification and Coast Guard personnel have assumed lead in the National Safety Transportation Board investigation into the cause of the explosion.