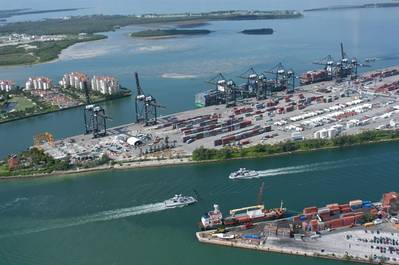 Great Lakes Dredge & Dock Corporation (GLDD), says it has received the payment from the U.S. Army Corps of Engineers - Jacksonville District which will bring the total value of GLDD’s Miami contract up to $174.1 million. There is $31.6 million remaining to be awarded under the current plan of the Corps.

This option, which is the first of two options for the project, covers the dredging of Fisherman's Channel and Lummus Island Turning Basin, as well as dredging the adjacent berthing areas. The project is to deepen PortMiami to a depth of 50/52 feet to accommodate post-Panamax cargo ships that will start traveling through the expanded Panama Canal in 2015.

GLDD explains that it began a two-year project to deepen Miami Harbor in November 2013. The cutter suction dredge Texas, the largest in the Great Lakes’ fleet, will execute the majority of the dredging operation.

The Port of Miami—one of the busiest ports in the United States—is both the main gateway for cargo entering the United States from Central and South America and the ''Cruise Ship Capital of the World,'' with one in seven of all cruise journeys starting or ending in the port. Miami's harbor is also home to a unique eco-system.

GLDD adds that they and their partners conducted extensive environmental surveys and scientific dives prior to the start of dredging and will continue to monitor during performance of the project to ensure the project is being completed in an environmentally sound manner.

The Company
Great Lakes Dredge & Dock Corporation is the largest provider of dredging services in the United States and the only U.S. dredging company with significant international operations. It is also one of the largest U.S. providers of commercial and industrial demolition and remediation services primarily in the Northeast and Midwest.

Vancouver, Wash. based Tidewater Transportation and Terminals announced Friday it has hired Johan Sperling as its new Vice…