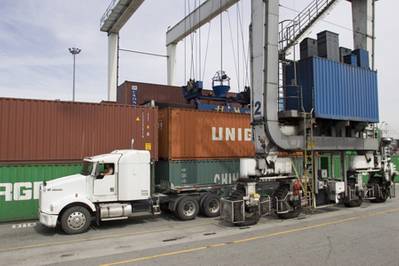 Unionized container truck drivers set up picket lines at Canada's largest port on Monday, joining hundreds of non-unionized workers who walked off the job last month in a dispute over pay and services.

Workers represented by Canada's largest private sector union Unifor rejected a tentative deal on Saturday that could have adverted the job action at Port Metro Vancouver, calling the offer "too little, too late."

They will now join a nearly two-week long strike by non-unionized drivers, which has already crippled operations at the busy port, hitting the export of commodities like lumber and specialized grain products, and the import of consumer goods.

"The impact of truckers walking off the job is in the order of about C$885 million ($796.9 million) per week," Port Metro Vancouver Chief Executive Robin Silvester said in a statement late on Sunday. "Goods are not moving and that is bad news for consumers and businesses."

Rising Asian demand for Canadian products has led to a boom at the city's port facilities, which handled a record 135 million tonnes of cargo in 2013, including about 25 million tonnes of containerized material. The busy port handled C$172 billion in goods in 2012, representing one-fifth of Canada's total trade by value.

But the container truck drivers say they are facing swelling wait times at terminals, which cut into their profits. They are demanding regulated pay rates to help prevent trucking companies from undercutting one another, and a fair hourly wage while waiting.

Container truck drivers are paid by the load and do not make money while waiting in line to load or unload cargo.

Unifor said it was working to get talks back on track for its members, but noted that it is dealing with dozens of individual trucking companies, making coordination difficult.

"We've been burning up the phone lines all weekend long, trying to get something happening," said Gavin McGarrigle, Unifor's area director for British Columbia. "Nothing has happened so far."

For the companies that use containers to move product in and out of Canadian ports, the port strike is exacerbating delays caused by railway backlog.

"It's a complete disaster for our container program as we are already at least a month behind in shipping," said Kevin Price, a senior trader at Agrocorp Canada, which moves pulse crops and wheat by container.

"We are being held hostage and our buyers are losing patience with Canadian shippers."

Hundreds of non-unionized drivers walked off the job on Feb. 26, with unionized workers voting to join them just days later. It is third strike in 15 years at the port, including a six-week action in 2005 over similar issues.

The federal government, eager to resolve the dispute at Port Metro Vancouver quickly, brought in a mediator last week to help with negotiations and to conduct a review on the long-running labor issues.

The port has said it is working on new infrastructure and practices to improve wait times at its facilities, and blamed some of the backlog on extreme weather.