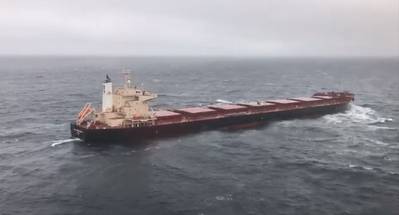 An ailing mariner was medevaced Thursday from a bulk carrier more than 250 miles west of San Diego, the U.S. Coast Guard said.

On Wednesday night, watchstanders at 11th Coast Guard District command center received a request for assistance from the Panamanian-flagged bulker Jal Kamadhenu, which reported a 55-year-old crewman on board was displaying symptoms of a possible heart attack or stroke.

Once on scene, the helicopter crew lowered a rescue swimmer onto the deck of the 748-foot ship to assess the ailing crewman before lowering a stretcher to hoist the patient into the helicopter.

The Jal Kamadhenu departed Vancouver, Canada on Saturday and is sailing toward the Panama Canal, according to AIS ship tracking data.

Thai Navy Scrambles to Save Cats from Sinking Ship