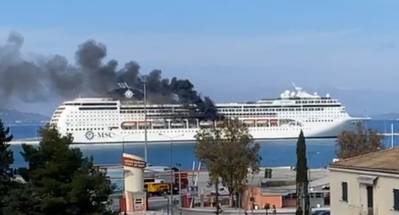 Screenshot from video below

MSC Cruises said a fire broke out aboard one of its vessels idled in Greece, on Thursday.

The fire was reported at 3:42 p.m. local time aboard the MSC Lirica, currently in warm layup without passengers on the Greek island Corfu, and was put out by the ship’s two fire brigades and local emergency services teams by 6:58 p.m. No injuries were reported among the 51 crew members on board at the time of the incident, the cruise line said.

MSC Cruises said the blaze originated from a starboard-side fiberglass lifeboat on the ship's sixth deck, and a preliminary assessment revealed only exterior damage to the vessel caused by the flames and dense black smoke.

A full investigation is ongoing, the cruise line said.

MSC Lirica has been idled due to the ongoing COVID-19 pandemic, and AIS ship tracking data shows the ship has been docked at the Port of Corfu since March 1.