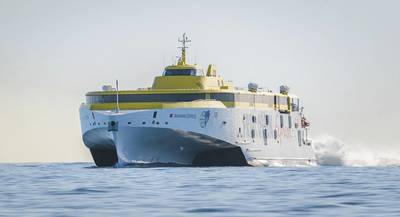 The first of two Austal Auto Express 118 trimarans under construction for Fred. Olsen Express of the Canary Islands has completed sea trials in Western Australia. Launched in February, the Bajamar Express (Austal Hull 394) is scheduled to be delivered this month.

Over the past weeks, Bajamar Express has achieved an average speed of 37.6 knots at 85% MCR (power), carrying 80% from maximum deadweight (cargo capacity), shipbuilder Austal said.

Austal CEO David Singleton said the results of the Bajamar Express sea trials, which included reaching over 42 knots and easily exceeding contract speed, were a great demonstration of the trimaran’s unique capabilities and exceptional seakeeping characteristics.

“The new Bajamar Express builds upon the successful trimaran hull first developed by Austal for Fred. Olsen Express in the iconic Benchijigua Express, delivered in 2005. This next generation of high speed ferry is going to offer an even greater customer experience, for which Fred. Olsen Express has become renowned.”

Fred. Olsen S.A. CEO Andrés Marín said a “superior maritime experience” has been achieved. “Achieving more than 42 knots speed, while maintaining the comfort of passengers on-board, clearly demonstrates the superiority of the Bajamar Express,” he said.

Marín said Bajamar Express and sister ship, Bañaderos Express, will include latest preventive measures for COVID-19 safety, including protocols certified by Aenor. Fred. Olsen Express is the first Spanish transport and tourism company to achieve this certification, he said.

Capable of transporting 1,100 passengers and 276 cars at a cruising speed of over 37 knots, the new ferries for Fred. Olsen Express features interior amenities and facilities such as multiple bars, kiosks, a retail shop and children’s play area and will operate on Fred. Olsen Express’ Santa Cruz, Teneriffe and Agaete, Gran Canaria routes in the Canary Islands from the third quarter of 2020. 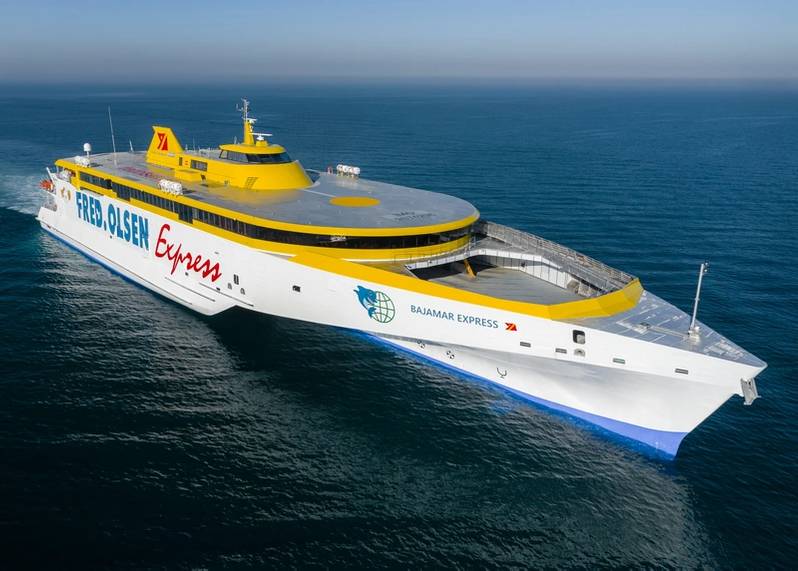