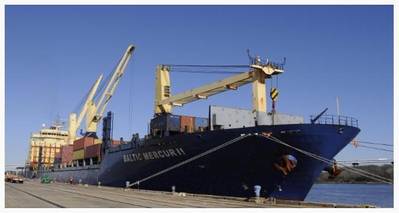 South Carolina Ports Authority posts container volumes growth in 2015; Charleston welcomes new multipurpose carrier service
South Carolina Ports Authority (SCPA) posted 10 percent container growth in 2015, a year highlighted by strong volumes and significant progress on the harbor deepening project.
SCPA handled 144,718 twenty-foot equivalent units (TEUs) in December, pushing total container volume to 1.97 million in 2015.
As measured in pier containers, or total boxes handled, SCPA's two container terminals moved 1.12 million boxes in 2015, an increase of 9.54 percent over 1.02 million containers handled last year.
"Our 10 percent TEU volume growth for the 2015 calendar year is outstanding," said Jim Newsome, SCPA president and CEO. "Successful recruitment of discretionary cargo has been an important driver of volumes, as well as continued strength of the automotive sector. However, looking ahead to the second half of our 2016 fiscal year, we expect flat to very modest growth due largely to weakness in overseas markets. Because of the Panama Canal expansion delay, we will not see new ship deployments of significance until FY2017."
Non-containerized cargo business volume was strong in 2015, with 1.34 million pier tons handled during the year. Finished vehicle volume grew 13 percent year over year, with 268,964 vehicles crossing SCPA docks in 2015.
The Inland Port handled 7,824 rail moves in December, more than double the facility's December volume last year. The facility's rail volumes grew 76.5 percent during its second full calendar year of operation, with 75,111 total rail moves completed in 2015.
In addition to strong volume growth during the year, Newsome also highlighted the successful progress of the Charleston Harbor Deepening Project. With the issuance of the Chief's Report in September and signing of the PreConstruction Engineering and Design Agreement in December, the project continued to move forward with historic momentum through the U.S. Army Corps of Engineers planning process. Last week the project cleared another milestone with the Record of Decision, the formal recommendation of the project to Congress for authorization.
New Multipurpose Carrier Service
SCPA recently added a new regular shipping service, Atlantic Ro-Ro Carriers (ARRC), to its vessel calls at Columbus Street Terminal. The first ARRC vessel arrived on January 8, handling approximately 6,000 tons of import cargo.
ARRC specializes in handling freight for multiple business segments, including container, breakbulk, rolling stock and project cargo. Charleston is an addition to ARRC's Balt-Atlantic service, which utilizes multiple vessels to connect St. Petersburg, Russia and other North Europe ports with the U.S. East Coast.
"ARRC's multipurpose capabilities are an exciting addition to SCPA's breakbulk opportunities that further enhance our connection with North Europe," said Paul McClintock, SCPA Senior Vice President of Sales and Marketing. "We're pleased to welcome their regular calls."
Board Action
The SCPA Board approved two contracts related to the development of the Hugh K. Leatherman, Sr. Terminal, including consultancy services for the concept design phase and a change order for additional construction activities pertaining to the containment wall. The facility will increase SCPA's current container capacity by 50 percent, with the first phase expected to open for operations by 2020.
To accommodate rapid growth within SCPA's refrigerated cargo market, the Board also approved a construction contract for the installation of additional refrigerated container infrastructure at the Wando Welch Terminal.
Main Office Sale
The Board authorized SCPA to sell the Main Office at 176 Concord Street in Charleston and directed the Real Estate Development Committee to finalize the offering and process by February 1.
"The need for our administrative and corporate office to be closer to our port operations is the primary driver of our decision to sell our current office," Newsome said.
Resolution Honoring Former Charleston Mayor
The Board also adopted a resolution honoring the former Charleston Mayor Joseph P. Riley, Jr. and declaring January 20, 2016, as Joseph P. Riley, Jr. Day at the Port of Charleston.
"Mayor Riley's father served on the SCPA Board from 1969 to 1977, and he continued that legacy as a tireless supporter of the growth and development of our Port," said SCPA Board Chair Pat McKinney. "Especially with regard to the harbor deepening project, Mayor Riley has worked in partnership with our Board and staff to ensure the economic well-being of the Port, and in turn the entire City of Charleston."
Riley utilized his relationships with the Obama Administration to elevate the importance of harbor deepening and to garner support and timely forward progress of the project on the federal level. He has also supported SCPA's cruise business and plans for the non-maritime redevelopment of Union Pier for the benefit of the Port and the City.

The  container logistics company A.P. Moller - Maersk has embarked on a journey that covers the end-to-end logistics of first…