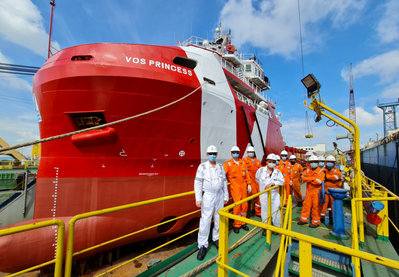 Vroon said this week that the contract with ENI was on a long-term drilling project, with Vroon providing platform-supply vessels VOS Princess and VOS Principle in support of the drillship SAIPEM 12000.

ENI’s campaign will resume in the second half of December, after a suspension due to the COVID-19 pandemic. The project is scheduled to last around seven months.

"VOS Princess and VOS Principle have both completed the necessary special surveys and are now proceeding to African waters, where they will commence work in the coming weeks," Vroon said.

VOS Princess, under the management of VOS Singapore, had spent the earlier part of this year on an Indian charter, performing supply and accommodation duties. The vessel's docking and special survey were conducted in early November at the Keppel Yard in Singapore.

VOS Principle, managed by VOS Genoa, had previously worked for ENI in the region during 2019 and 2020. Its docking and special survey were carried out in Italy and Greece, before departure to Mozambique.

The development is based on six ultra-deepwater wells in the Coral Field, at a water depth of around 2,000 meters, feeding via a full flexible system the Coral-Sul FLNG. The Coral field has approximately 16 trillion cubic feet of gas in place and was discovered by Eni in May 2012.

Last month, the last of 13 topside modules was lifted and installed aboard Eni's Mozambique-bound Coral-Sul FLNG facility, being built by Samsung Heavy Industries in South Korea.