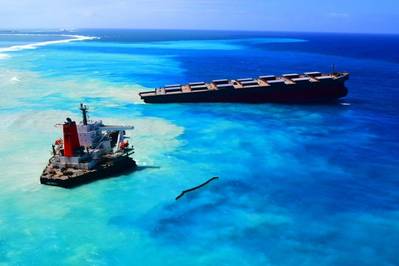 Two officers from a bulk carrier that ran aground and broke apart atop a coral reef off Mauritius have been sentenced for endangering safe navigation.

Sunil Kumar Nandeshwar, captain of the Japanese-owned Wakashio, and the ship's first officer Hitihanillage Subhoda Janendra Tilakaratna pleaded guilty under the 2007 Merchant shipping act by a court in Port Louis. The two men, having both been held since August 2020, were sentenced to 20 months in prison.

Nandeshwar, who admitted to drinking alcohol during an onboard birthday party prior to the July 2020 grounding, said he had given orders to approach Mauritian waters so that the crew could get phone reception while en route to Brazil form China.

"The sea was bad but the visibility was clear and it was safe to navigate," Nandeshwar said. "At one point, the ship could not move and had touched the sea floor.

"Since I had a few drinks, it did not seem worthwhile to intervene and it did not occur to me that we were sailing that close."

On July 25, the 300-meter Wakashio struck a reef near Pointe d'Esny off the Indian Ocean island's east coast, triggering an ecological disaster and prompting the Mauritian government to declare a state of emergency.

The lookout officer did not ensure the safe navigation of the ship as he had been allowed to stay at the birthday party, an investigation found.

In total, about 1,000 metric tons of fuel oil spilled from the cracked hull of the Panamanian-flagged vessel into the water and onto shore before salvage crews managed to remove most of the ship's remaining oil. The condition of the large 203,130 dwt bulker continued to deteriorate, and the vessel split in two.