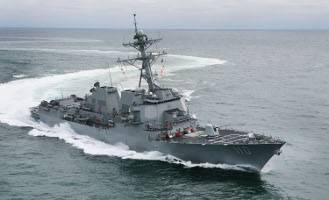 The Navy welcomed guided-missile destroyer USS William P. Lawrence (DDG 110) into the fleet during a commissioning ceremony in Mobile, Ala., June 4.

The newest Arleigh Burke-class ship, the 60th of its class, is named in honor of the late Vice Adm. William P. Lawrence, a highly-decorated Naval aviator and Vietname prisoner of war.
Lawrence began his naval career as an academic scholar and athlete at the U.S. Naval Academy, where he later returned to occupy the Chair of Naval Leadership after retiring from active duty, Feb. 1, 1986.
His aircraft was shot down over North Vietnam in June 1967 and he was held captive until March 1973. His dedication and perseverance during that period inspired the ship to claim the motto, "Never Give In."
"[Lawrence] and many others were heroes among heroes by leading a resistance of our prisoners in Vietnam," said Adm. James Winnefeld, commander, North American Aerospace Defense Command and Commander, United States Northern Command. "Indeed we should recognize those men that are with us today because consistent with our ship's motto, they never gave in."
"I assure you we will be ready," said Cmdr. Tom Williams, commanding officer, USS William P. Lawrence (DDG 110). "Whatever challenge may be ahead for this crew, we have set a good course and the only course I will accept is toward excellence."
An audience of more than 3,000 attended the ceremony, held at the Alabama State Docks. The crowd consisted of family and friends of USS William P. Lawrence crew members, a host of U.S. military veterans and many others associated with the Lawrence family.
The ship was christened by three women important to Lawrence, his widow, Diane Wilcox Lawrence, and daughters, Dr. Laurie Macpherson Lawrence and U.S. Navy Capt. (ret.) Wendy B. Lawrence, the ship's sponsor.
The ceremony concluded when the Lawrence family said, bring our ship to life!" The Sailors then manned the rails.
"I look at this as a spring board to much greater things, it's my first command and I couldn't be happier," said Sonar Technician Seaman Apprentice Scott Peterson. "I am very proud to be a part of the most technologically advanced warship in the world."
During the ship's brief stop in Mobile, the crew of William P. Lawrence was heartily welcomed by the local community. The city's minor league baseball team hosted a Navy night, during which Williams threw the first pitch. Crew members also donated many service hours to Habitat for Humanities community relations projects.
"The Sailors on this ship has taken [Lawrence's] spirit and his character to heart and they're the real secret to making this the best ship in the fleet, said Williams. "We're named for a modern naval hero who was known as the Sailor's Admiral, and he really took care of people."