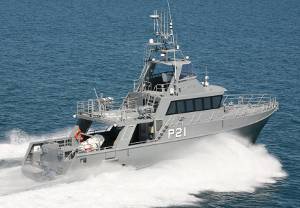 Austal has completed its first European defense contract following the commissioning of four 69.5-ft inshore patrol craft for the Armed Forces of Malta (AFM). The aluminum vessels have a maximum speed of more than 26 knots and will assist the AFM with surveillance and border protection throughout Malta’s coastal waters.

Speaking at the commissioning ceremony held on March 18, Maltese Prime Minister Lawrence Gonzi (pictured) described the vessels as “the pride of the Maritime Squadron’s fleet.”

“The modern and cutting-edge technology coupled with the best accommodation facilities will also provide a better working environment for the crew,” Prime Minister Gonzi said. “The patrol boats were purposely built and customized in line with the Squadron’s requirements.”

Austal was awarded the contract in February 2009 following a competitive international tender process, which called for a proven design that addressed specific AFM requirements. The project was co-financed by the European Union’s External Border’s Fund. The four vessels were built at Austal’s Western Australian facility and delivered to Malta via liftship.

Austal’s 69.5-ft inshore patrol platform is a fast and versatile platform designed for coastal surveillance and search and rescue. The all-aluminium monohull provides enhanced crew habitability, maneuverability and fuel efficiency across various operating conditions. An elevated fly bridge provides optimal visibility during near-range operations.  The vessel is equipped with fire fighting capability via a fire monitor on the aft flybridge deck, alongside two 7.62mm light machine gun mounts. Mounting for one 12.7mm heavy machine gun is positioned near the vessel’s bow. Two separate amenities blocks are located either side of the main boarding entry. Their accessibility from the outside main aft deck enables non-crew use without entering the vessel’s main internal areas.

Adding to the platform’s versatility is a bilge manifold located above the main aft deck, which can perform salvage pumping of another vessel if needed. A stern launching ramp allows the safe deployment and retrieval of a rigid hull inflatable boat and dive operations are supported via low-to-the-water platforms located aft. A galley and crew mess are located in the lower deck, along with two two-berth cabins each with lockers and bench. A four-berth cabin is located in the vessel’s bow, along with additional locker storage space.