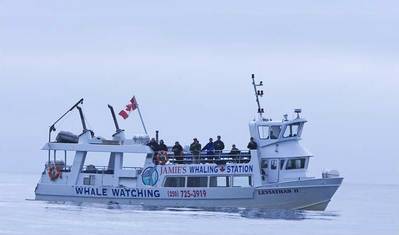 Five Britons were killed when a Canadian whale-watching boat sank on Sunday, the British foreign secretary said on Monday.

The boat, carrying 27 passengers, sank off the coast of British Columbia on Sunday afternoon, sparking a rescue effort by the Coast Guard, fisherman and private mariners. Five people were confirmed dead and one was missing, while 21 were rescued.

"My thoughts are with the family and friends of all those affected by this terrible accident," U.K. Foreign Secretary Philip Hammond said in a statement.

"Consular staff in British Columbia are supporting the family members of those who have died and we will remain in close contact with Canadian authorities as further information becomes available."

The vessel, the Leviathan II, was operated by Jamie's Whaling Station and Adventure Centres.

"It has been a tragic day. Our entire team is heartbroken over this incident and our hearts go out to the families, friends and loved ones of everyone involved," owner Jamie Bray said in a statement posted on the company's website.

"We are cooperating with investigators to determine exactly what happened," he said.

In 1998, a boat operated by the same company sank near Tofino, killing the ship's captain and a German tourist.

A military rescue helicopter and plane responded after the vessel sent a distress signal around 5 p.m. local time, according to the JRCC. Military planes and coast guard vessels lit up the area where the vessel remained partially submerged, eight nautical miles northwest of Tofino.

Most of those rescued were taken to hospital, and several have since been released.

Tofino, a community of about 2,000 people on the west coast of Vancouver Island, is a popular tourist destination for surfers, hikers and whale watchers from around the world.

John Forde, who works at another eco-adventure company, said passengers on a vessel like the Leviathan II, a three-deck 65-foot cruiser that can carry up to 46 people, would not have had to wear life jackets. The boat, like ferries, would only be required to have life jackets on board.

He told the Global Television Network that the waves were three to four meters high at the time of the sinking, conditions that were rough but not unusual for the area, Forde said.

(By Paul Brian, With additing reporting by Leah Schnurr; Writing by Andrea Hopkins in Toronto)

A U.S.-flagged tug and deck barge reportedly struck a pier and grounded while conducting docking maneuvers at the Ensenada…