Wicker Urges Congress to Stay on Course to 355 Ship Navy 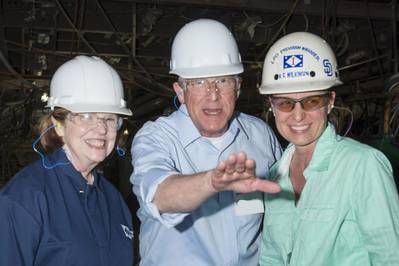 U.S. Senator Roger Wicker, R-Miss., on Thursday participated in a Senate Armed Services Committee hearing to consider nominations for the Department of Defense. At the hearing, Wicker pressed members of the committee and the nominees to devote more resources to meeting the needs of America’s military, including shipbuilding and aviation.

At the hearing, Wicker asked Kenneth Braithwaite, nominee for Secretary of the Navy, to comment on his support for a 355-ship Navy.

“I look to a role as being the chief advocate to build a fleet to have greater than 355 ships,” Braithwaite said.

Braithwaite also expressed his support for block buys of amphibious ships, which is a method of acquiring ships that has been used to save costs for the U.S. Navy.

Wicker’s comments at the hearing were in response to conversations with senior defense officials, including Department of Defense Secretary Mark Esper, regarding the need for at least $20 billion in additional appropriations to help meet deficiencies in the department’s shipbuilding and aviation budgets.

“In terms of the $3 trillion we've spent on our economy, it strikes me that it's a relative bargain to try to come up with $20 billion… dollars to get us back where we need to be, to where the top military leaders in our country tell us what will keep us safe,” Wicker said.

Wicker has been a strong advocate for sustained military funding during the COVID-19 crisis, including awarding contracts early for military suppliers that have experienced disruptions. Wicker hailed the early award of several contracts for Mississippi shipbuilders last month, including a $108 million contract for United States Marine, Inc., as well as a $1.5 billion award and another $187 million contract for Ingalls Shipbuilding