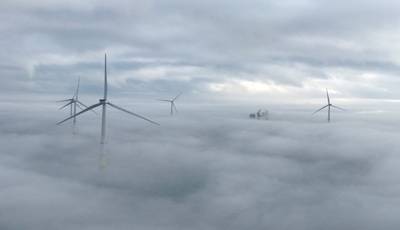 The world's largest offshore wind farm will open on Thursday off the northwest coast of England when Danish energy group Orsted unveils the Walney Extension project.

Walney Extension is made up of 87 turbines built by Siemens Gamesa and MHI Vestas, and covers 145 square kilometers (55 square miles), which is equivalent to around 20,000 football pitches.

The 40 eight-megawatt MHI Vestas turbines being used stand 195 meters (213 yards) tall and are the largest wind turbines in operation globally.

Orsted said they have been optimized to generate as much as 8.25 MW each.

Matthew Wright, Orsted UK managing director, told Reuters in an interview Britain's offshore success was due to a combination of strong wind speeds and shallow waters in the North Sea and Irish Sea as well as continued support from the government.

"For the last 10 years governments of all colors have supported renewable energy and offshore wind in the UK, leading to a thriving industry," he said.

Walney Extension was among the first renewable projects to secure a so-called contract for difference (CFD) subsidy from the British government in 2014.

The contract guarantees it a minimum price for electricity of 150 pounds ($195) per megawatt hour (MWh) for 15 years.

Since this was awarded, the cost of offshore wind has fallen dramatically to a low of 57.50 pounds per MWh in the last auction held in 2017.

Blades for both sets of turbines were made at British factories, in Hull and the Isle of Wight, and Wright said the company was keen to use local facilities.

"Approximately 50 percent of the value of the project over its lifetime will have come from UK sources," he said.

Walney Extension is a shared-ownership project between Orsted (50 percent) and two Danish pension funds - PFA and PKA (25 percent each).