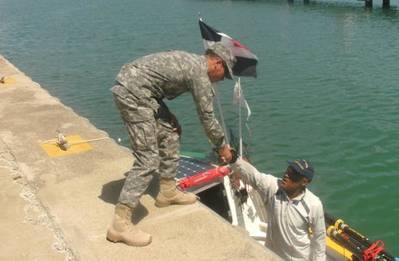 Lt. Carlos Paredes of Dominican Republic Navy welcomes Victor Mooney of Queens, New York to Ocean World Marina in Puerta Plata last week. Mooney has rowed from the coast of Africa and will end his journey in New York City. The rower is honoring his brother who died of AIDS and to promote voluntary HIV testing.

Victor Mooney, of Queens, New York and his Brazilian built rowboat, The Spirit of Malabo, are about eight hundred miles from Miami. He must first get through Cuba.

Mooney began his transatlantic row on February, 19 from the coast of Africa to honor his brother who died of AIDS in 1983 and to advocate voluntary HIV testing. This is Mooney’s fourth attempt at this feat and the furthest point he has reached. He has overcome eighty pound weight loss and a shark attack.

Mooney broke his oars twice, with the latest mishap occurring when he crossed the Mona Passage, a treacherous body of water between Puerto and the Dominican Republic. Currently, Ocean World Marina is helping the rower get some rest and dry goods as Hurricane Gonzalo passes behind him.

Mooney hopes to arrive in Marina Gaviota Puerto de Vita in Holquin, Cuba within several weeks. After a brief rest on the Spirit of Malabo, the rower will continue to Marina Cayo Coco Guillermo before making the crossing to Florida. According to Mooney, the US Coast Guard is monitoring his AIS signal. Locally, the Dominican Republic Navy has been helpful to rower’s safety as well.

The rower also received support from Marina Puerto Bahia, the Mayor and Governor of Samana Province. To help the rower finish his mission, visit www.gofundme.com/victormooney.