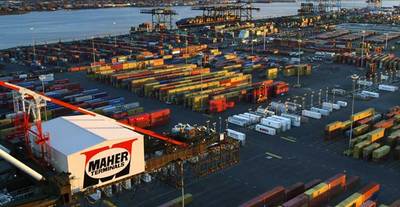 The Port Authority of New York and New Jersey announced that annual cargo volumes in the port set a new record in 2014, surpassing the previous record set in 2012.

The port said it handled 3,342,286 cargo containers in 2014, an increase of 5.4 percent over the previous year and 4.1 percent more than in 2012, when the previous annual record was established. The record volumes allowed the port to maintain its position as the busiest on the East Coast with nearly 30 percent of the total market share, the port authority noted.
ExpressRail, the port authority’s ship-to-rail system serving New York and New Jersey marine terminals, also set a new record, handling 465,405 containers during the year, up 9.3 percent over 2013. The previous annual record was set in 2012, with 433,481 containers handled. The agency’s investment of more than $600 million in ExpressRail – and its upcoming plans to build a new ExpressRail facility in Greenville Yard in Jersey City – has been critical to addressing the need for on-dock rail to improve port efficiency, competitiveness and reduce emissions. The port’s road, rail and security projects are now funded by portwide Cargo Facility Charges.
“Our port is continuing to reap the benefits of an uptick in the economy, which has resulted in the hiring of more dockworkers and economic growth for the region,” said Port Authority Executive Director Pat Foye. “We plan to continue our investments in the port in the coming years to maintain the port’s 296,000 direct and indirect jobs and to cement our port as the East Coast’s leading destination.
On the labor front, 601 new longshoremen and checkers have been certified by the Waterfront Commission in the past year to work at the port and of that number, 577 are currently working while the balance are preparing to begin their employment.
“We made progress last year to more efficiently handle the level of cargo coming into this port, but we clearly recognize more needs to be done,” said Port Authority Port Commerce Director Richard Larrabee. “We have a clear plan moving forward to meet the challenges that lie ahead to ensure that we can accommodate the larger ships and the cargo volumes that want to come to the New York-New Jersey region.”
In 2014, the port reported a 12.8 percent decrease in vehicles handled in the port – from 451,900 units handled in 2013 to 393,931 handled in 2014. To attract new vehicle business to the port in 2015, the Port Authority began a targeted incentive program in April 2014 to attract new automobile manufacturers and to provide incentives to existing ones to increase the port’s vehicle volumes.
During 2014, China remained the top import country serving the port, with 923,975 import containers. Following China are Germany (179,715 import containers) and India (176,621 import containers). The top import commodities in 2014 were furniture, beverages and appliances.
In 2014, there were 2,432 vessel calls in the port, down 2.3 percent from the 2,488 vessel calls in 2013. The fewer vessel calls illustrate that much of the cargo coming into the port is arriving in larger ships, a trend that the port expects will continue after the Bayonne Bridge is raised. Construction on the $1.6 billion bridge project is continuing, and, when completed in the summer of 2016, will allow new, larger post-Panamax vessels to travel underneath it. Work also is continuing on the 50-foot harbor deepening project, which also is expected to be completed early 2016. The project also will allow new, larger vessels to call on port terminals.
Emissions caused by port-related activity have been declining as port volumes have increased due to Port Authority incentive programs and Port Authority and private terminal operators’ investments in more environmentally friendly equipment. For the six-year period 2006 to 2012, the most recent data available, major pollutants decreased about 33 percent despite an 8.6 percent increase in port cargo volume over the same period.
To continue the port’s ability to handle increasing cargo volumes, the port authority formed a Port Performance Task Force in December 2013 to explore ways to improve efficiency and service reliability at the port. The task force developed a series of 23 recommendations that if implemented would reduce truck congestion and air emissions in the Port of New York and New Jersey, improve customer service for truckers and other port stakeholders, and enhance the flow of goods to and from the marketplace. A group of port stakeholders – the Council on Port Performance – has been formed to begin the task of planning and implementing the recommendations.