Zelenskiy: Millions Could Starve Because of Russian Blockade of Ukraine's Black Sea Ports 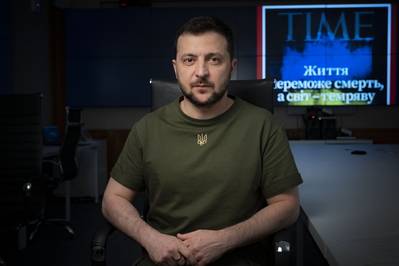 Ukrainian President Volodymyr Zelenskiy warned that millions of people could starve because of a Russian blockade of Ukraine's Black Sea ports which he said had left the world "on the brink of a terrible food crisis."

Russia has seized large parts of Ukraine's coast, blocking farm exports and driving up the cost of grain.

Zelenskiy said Ukraine was now unable to export large amounts of wheat, corn, vegetable oil and other products that had played a "stabilizing role in the global market".

"Millions of people may starve if the Russian blockade of the Black Sea continues," he said in a video statement to the TIME100 Gala 2022 in New York that was released by Ukrainian authorities on Thursday.

Ukraine and the West accuse Moscow of weaponizing food supplies. Russia says Ukrainian mines laid at sea and international sanctions on Moscow are to blame.

Kyiv used to export most of its goods through seaports but since Russia's Feb. 24 invasion has been forced to transport grain by train via Ukraine's western border or via small Danube river ports.

Zelenskiy, who was included on Time magazine's list of the 100 most influential people of 2022, said he was grateful to U.S. President Joe Biden for "uniting the free world when the Russian threat arose."

He also appealed to Ukraine's allies to supply it with more arms, drawing comparisons between what he described as Russian hatred and COVID-19.

"Weapons and sanctions are also a vaccine: a vaccine against COVID-22 brought by Russia. Hatred is a virus, and it’s even more deadly than COVID-19," he said.

Russia did not immediately respond to Zelenskiy's comments. Moscow says its "special military operation" in Ukraine is intended to disarm and "denazify" its neighbor. Ukraine and its allies say Moscow has launched an unprovoked war of aggression.

The Port of Rotterdam Authority and Eneco are going to construct shore-based power facilities in the Waalhaven, Rotterdam…