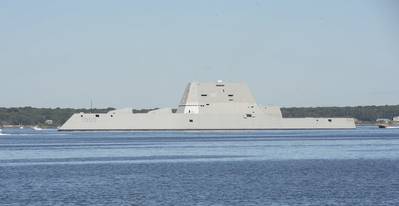 The U.S. Navy’s newest and most technologically advanced surface ship, future USS Zumwalt (DDG 1000), pulled into Naval Station Norfolk Wednesday for another port visit as part of its three-month journey to its new homeport in San Diego.

Crewed by 147 Sailors, Zumwalt is the lead ship of a class of next-generation multi-mission destroyers designed to strengthen naval power. They are capable of performing critical maritime missions and enhance the Navy's ability to provide deterrence, power projection and sea control.
“It is a great opportunity to bring Zumwalt to Norfolk, an area steeped in naval history and ever vital to the U.S. Navy,” said Capt. James A. Kirk, Zumwalt's commanding officer. “It is a chance for the sailors of Zumwalt to show their Atlantic Coast shipmates the teamwork, technical expertise and toughness it takes to operate a Zumwalt-class destroyer.”
While in Norfolk, Zumwalt is scheduled to perform operational proficiency training, certifications and preparation for its October commissioning.
“Training is the foundation of every operation we perform in the Navy, and it is our job to ensure we use the time in Norfolk to get as much quality training as we can. Successful training pays dividends for sailors out at sea,” said Kirk.
Zumwalt departed Newport, R.I., Monday following a weekend of visits from students of several Navy schools, including the Naval War College, and distinguished government and military visitors.
“Our first ever port visit was to Newport, or the U.S. Navy's surface warfare center of gravity, where we were able to host tours and give our schoolhouse surface warfare officers and other distinguished guests a look at the future of the surface fleet,” Kirk said.
USS Zumwalt will be formally commissioned during Fleet Week Maryland in Baltimore, October 15.
“Each day that passes is one step closer to commissioning and one step closer to joining the fleet. The crew is ready to face the challenges in the coming months and excited to be operating this fine warship,” Kirk said.
Following the commissioning ceremony Zumwalt will begin its transit to San Diego, making several port visits en route. Upon arrival in San Diego, she is scheduled to take part in a Post Delivery Availability and Mission Systems Activation and is expected to be integrated into the fleet in 2018 following test and evaluation.
Named for Adm. Elmo R. “Bud” Zumwalt Jr., former chief of naval operations (CNO) from 1970 to 1974, the Zumwalt-class features a state-of-the-art electric propulsion system, a wave-piercing tumblehome hull, stealth design and the latest war fighting technology and weaponry available.
A veteran of World War II and the conflicts in Korea and Vietnam, Adm. Zumwalt exemplified honor, courage and commitment during 32 years of dedicated naval service, earning a Bronze Star with Valor for his actions during the Battle of Leyte Gulf.
DDG 1000 will be the first U.S. Navy combatant surface ship to utilize an integrated power system (IPS) to provide electric power for propulsion and ship services. The IPS generates approximately 78 megawatts of power, nearly what a nuclear-powered aircraft carrier generates, to meet the total ship electric power requirements and provide extra capacity to accommodate future weapons and computing systems.
In addition to its advanced weapon and propulsion systems, Zumwalt is much larger than today’s destroyers. At 610 feet long and 80.7 feet wide, Zumwalt is 100 feet longer and 13 feet wider, and its flight deck is 93 percent larger than an Arleigh Burke-class destroyer.