Posted to Maritime Reporter (by Greg Trauthwein) on June 12, 2022

As shipowners struggle to determine the best means to leverage digital solutions, Tor Svanes, CEO, NAVTOR, is a treasure trove of intel and perspective, past, present and future. Svanes is an ECDIS pioneer with a long personal connection to the tech that sits at the center of unlocking the value of digitalization.

Maritime is seemingly interwoven in Norway’s DNA. The country and its population have thrived making a living on, under and around the seas, while simultaneously respecting the potential perils and the environment itself.

Tor Svanes, CEO of NAVTOR, is symbolic of the Norwegian grit, a bona fide ECDIS pioneer emerging from a small Norwegian town and evolving into a visionary corporate and technology leader.

With its enabling technologies, NAVTOR today sits at the crux of the digitalization and decarbonization transformation starting to sweep through maritime globally.

“First of all, everything is based on my love the sea,” said Svanes, during his recent interview with Maritime Reporter TV in Oslo. “I’ve been on the sea since I was born more or less, so for me it was quite natural to try to go to sea as soon as I could.”

Broad Experience
Svanes’ parents would not allow young Tor to go to sea until he was age 18, so he embarked on the path as an electrician apprentice until starting his sailing career with Smedvig at 18. He sailed for two years during an interesting time for the maritime industry as more modern ships with increasingly sophisticated electronics started to become the norm rather than exception. The shipping company, with Svanes’ electrician background, “took it for granted that I knew everything on the new stuff. So I made the decision: I cannot do this if I don’t find out what’s going on inside of those boxes.”

So Svanes started in a technical school, but ended up in a Norwegian Technical University, earning a Master’s degree in cybernetics.

“In a way, that was good because I was older than the other students and I had a lot of practical knowledge. Many of the things that we discussed I could picture, because I knew what it looked like in real life.”

His love for the sea and practical knowledge from sailing combined with his technical education from university put Svanes firmly on the maritime digitalization path even before maritime itself understood where it was heading.

“I was at NorShipping 30 years ago presenting ECDIS to the king of Norway, giving him ECDIS for his Royal yacht,” said Svanes. “So it has been going on for some time.”

Fast forward to 11 years ago, when in January 2011 Svanes was forced out of C-Map Norway, the company under his leadership which had become one of the world’s leading suppliers of electronic maps. Four years earlier, C-Map Norway had been acquired by The Boeing Company’s Jeppesen Marine, but the new owners and Svanes had a different vision of the company’s goals and strategy.

For Svanes, the end was a new beginning, and starting with a blank sheet, he got the room for maneuver that he needed to build a new company—NAVTOR—based on his understanding of where the future would lie for maritime navigation: the cloud-based Pay-As-You Sail concept. And with Smedvig now as a main shareholder, the company gained financial muscle it needed.

“Digitalization”: Easier Said Than Done
The word ‘digitalization’ has become an industry-wide buzzword, bandied about with increasing frequency and volume by a growing legion of digital solution providers. But Svanes cautions that not all solutions are cut from the same cloth.

“When they talk about digitalization, it’s not that easy. The difficulty is to get hold of the data on the vessel, because that’s what we talk about when we talk about emissions and fuel consumption,” said Svanes. “You need data from the vessel. So being the biggest player in e-navigation, it was natural for us to go into performance” and all that it entails.

According to Svanes, the key factor that makes NAVTOR truly stand out is its complete focus on delivering an integrated solution.

“There are many companies doing performance; there are also many companies doing e-navigation. But I think it’s only NAVTOR that really can in volume put this together as an integrated solution where you put in data once,” said Svanes. In this regard, NAVTOR’s Digital Logbook plays a central role, allowing owners to insert data in one spot, at one time, creating a repository for data and information that is being tapped throughout the ship’s integrated solutions and reports.

“You only put data in once and it is used in all systems, but to do so, you have to first have an integrated solution and all of the elements that go with it.”

To that end, Svanes realized that with the pace of technological evolution, it was not practical for NAVTOR to create the complete solution in house. With that, NAVTOR recently purchased two companies: “Tres Solutions, which does the performance part, and Ingenium Marine which brought in the Digital Logbooks.” This effectively enabled Svanes’ vision of a complete integrated solution to generate a thorough overview of what’s happening on the ship.

These, and likely future acquisitions, were powered by the company evolving from a privately owned family company.

“It was a big change for us to go from a family-owned company to a private equity company, but it suddenly opened some doors for us,” said Svanes. “Since we were invested in as a platform, it meant that we should also do acquisitions, and this is what we’ve done. With Tres and Ingenium now in the fold to ‘complete our circle with integrated solutions’, we probably have to do more mergers and acquisitions. Time is running fast, and we don’t have time to develop everything ourselves.”

Another key platform for NAVTOR is its NavStation software, a passage planning system under perpetual development and upgrade. “The latest thing we are showing now is auto routing”, which takes into consideration all variables about the vessel and the environment to help create the most efficient and effective route.

“I think this is the most advanced auto routing in the market today,” said Svanes, integrating and deploying the latest updates from artificial intelligence and marine learning, bringing it all back to the issue of sustainability. Burning less fuel means greater efficiency, profitability and less impact on the environment.

“The genius part is not only making the complex simple, but making it look easy, too.”

The Future
While companies like NAVTOR continue to invest in next-generation solutions, Svanes admits that many shipowners won’t make the changes and investments until they are forced to by regulation.

“It is still very much regulation-driven, with performance and emission control (and all of the required reporting) driving it today,” noting that the first question is usually “what is the minimum that I can do?”

Aside from efficiency and emission reduction, another driver central to NAVTOR’s future is autonomous vessels, and the company has been involved in projects regarding vessel control.

“To be clear, we are not in the control business, we are in the information, navigation monitoring business,” said Svanes. “But we definitely will play a role as we progress toward autonomous vessels.”

But he admits that the autonomous “revolution” will take a very long time, transitioning slowly at first with less people onboard before evolving to full autonomy. “We see already this happening in Norway in some local areas where they have autonomous vessels, but for international shipping it will take a long time. Remember that you have 60,000 IMO vessels sailing today, and they are going to live for another 20 to 25 years. So it’s not going to happen overnight.” 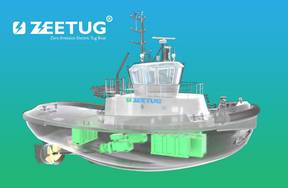