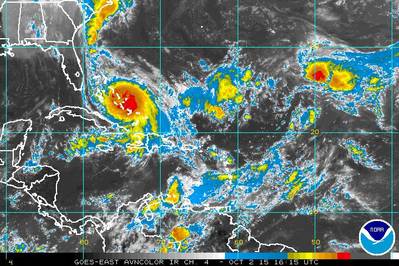 The fate of more than 30 crew aboard a cargo ship that ran afoul of Hurricane Joaquin off the Bahamas was unknown on Friday as the powerful storm battered the island chain for a second day.

News of the missing vessel came as forecasters shifted the likely track of the powerful storm further away from the U.S. East Coast, but there were still warnings about the potential for severe flooding in the Carolinas from unrelated heavy rains.

A potentially catastrophic Category 4 hurricane on a scale of 1 to 5, Joaquin turned northward on Friday and was expected to start gradually losing strength over cooler water in about 24 hours, the U.S. National Hurricane Center said.

Joaquin, the third hurricane of the 2015 Atlantic season, was about 40 miles (65 km) south of San Salvador island in the Bahamas around midday (1600 GMT) on Friday, with maximum sustained winds of 130 miles per hour (215 kph), the NHC said. The storm was crawling northwest at three miles (5 km) per hour.

The U.S. Coast Guard said search and rescue crews were hunting for the 735-foot (224 m) El Faro and its 33 crew members after it was overcome by heavy weather from Joaquin off Crooked Island in the Bahamas on Thursday morning.

The ship was headed to San Juan, Puerto Rico, from Jacksonville, Florida when it reported it had lost power and was taking on water, the Coast Guard said.

The Coast Guard said there had been no further communications after the vessel issued the emergency call at about 7:30 am (1130 GMT) Thursday.

The El Faro was in the eye of Joaquin about 35 miles north of Crooked Island when it issued the distress call, according to Chief Ryan Doss with the Coast Guard in Miami.

"They are in the eye of a Category Four storm and we have had 20-foot seas reported so it's going to take a while to get into the area," Doss said.

A Coast Guard cutter headed to help after taking part in a separate rescue mission off Haiti, while two Air Force Hurricane Hunter planes had searched in vain for the U.S.-owned El Faro.

"The low cloud cover makes satellite communications difficult," Doss said, while the winds and high seas made it hard to get close enough by sea or air.

"The storm is so bad and slow moving it's hard for our planes to get low enough to inspect the surface of the water."

Captain Stephen Russell, director of the Bahamas National Emergency Management Agency, said earlier there were no reports of deaths or injuries in the Bahamas due to Joaquin.

He cited reports of extensive flooding and structural damage on at least two smaller islands in the archipelago, but apart from some roofs ripped off houses, damage seemed to be limited.

The U.S. Coast Guard also said one of its helicopter crews had rescued 12 mariners who abandoned their sinking 212-foot (64.6 m) cargo ship after it was beset by heavy weather from Joaquin on Thursday evening off the northwest coast of Haiti.

The storm was expected to begin moving away from the Bahamas by late Friday night and its hurricane-force winds were forecast to miss the larger Bahamas islands and the main cities and cruise ship ports of Freeport and Nassau.

An easterly shift in the forecast track of the slow-moving system meant it was now expected to pass well off the U.S. eastern seaboard, according to the Miami-based NHC.

But accumulated rainfall in the Carolinas from unrelated storms this week coupled with more on the way from Joaquin prompted a warning from the National Weather Service on Friday about a "historic, potentially life-threatening rainfall event" in parts of the Carolinas and northeast Georgia this weekend.

Up to 12 inches (30.5 cm) of rain were expected in some areas between Friday and Sunday, with flash floods and gusts up to 35 miles per hour (56 kph) likely to topple trees and cause power outages, the Weather Service said.

"I cannot stress enough that we are talking about the real possibility of deadly flooding in many areas around our state," North Carolina Governor Pat McCrory said on Thursday.

Two deaths in the Carolinas on Thursday were linked to heavy rainfall.

Earlier this week, the governors of New Jersey, Virginia, North Carolina, South Carolina and Maryland declared states of emergency and announced measures including mobilization of National Guard troops in preparation for the storm.

Before the first easterly shift in Joaquin's trajectory, New York and New Jersey - where Superstorm Sandy killed more than 120 people and caused $70 billion of property damage in October 2012 - both faced potential threats from the storm.