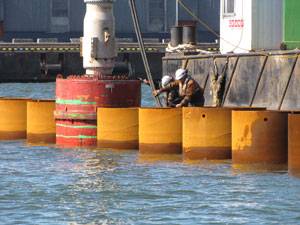 In very challenging weather conditions Danish contractor Per Aarsleff is installing its largest profile and one of its longest combination steel pile retaining walls for the extension to the container terminal in the Port of Muuga on the Gulf of Finland south coast, 17km east of the Estonian capital Tallinn. The site team, with its fleet of specialist marine plant, has been coping with freezing temperatures, strong winds and rough seas at the exposed site to accurately drive over 420 tubular steel piles up to 1.67m diameter and 45m long into the seabed. Approximately two thirds of these piles, weighing up to 32t, will be linked together in combination with pairs of shorter steel sheet piles to form the main combiwall quay frontage and a section of retaining combiwall running parallel with and alongside the terminal’s existing wharf.

One end of the combi sidewall will link into the terminal’s existing quay, while the other end of the main quay will combine with a new 800m long breakwater joining with the existing natural coastline. The continuous peripheral combiwall and adjoining breakwater will form an enclosed basin, which is being filled with 1.5Mm3 of sea-dredged sand to reclaim the new 180,000m2 extension to the terminal area. A second line of smaller diameter, equally spaced tubular piles is also being installed behind and parallel to the main berthing wall. Together they will provide the foundation support for the twin rail tracks to take the existing and new quayside container handling cranes.

Muuga Port is the biggest of the several harbors that make up the Port of Tallinn, which is one of the largest ports in the Baltic Sea region. Tallinn Port’s consulting engineers Merin Konsult produced a concept design for the Muuga Port extension, which was based on a twin combiwall of smaller diameter piles. But Per Aarsleff, in a split joint venture with the Estonian contractor KMG Inseneriehituse AS and the specialist Danish dredging contractor Rohde Nielsen A/S, won the DKK430M detailed design and construct project in open tender with its alternative design. This was produced by its Estonian consultant Estkonsult and based on a single continuous combiwall using much larger diameter tubular steel piles. Per Aarsleff’s share of the project is about DKK200M, while the remainder is equally split between the other two joint venture partners.

The joint venture moved onto site in September 2008 and started to attack the project simultaneously on several fronts. Initially Per Aarsleff built up a stock of the huge spirally welded tubular piles each complete with a pair of interlocking clutches welded diametrically opposite on the outside of the tubes. These were brought in from Holland together with pairs of the interlinking sheet piles from Luxemburg, which were all made and supplied by ArcelorMittal. Piling for the 205m long combiwall running alongside the existing quay wall started first. This section was constructed by a 130t Liebherr 1130 crawler crane and piling equipment operating from a series of platforms reclaimed behind temporary limestone bunds with. A pair of temporary tubes were first driven with a PVE52 vibrator as deadmen to support a special piling template frame to accommodate up to five of the main tubular piles set at the correct spacing and inline orientation of the interlocks. Each of the main piles was then pitched and driven to level by the PVE52 vibrator followed by pairs of the 10m long interlinking sheet piles. The temporary support piles and frame were removed and repositioned to repeat the cycle.  Every tenth pile was then struck with a Delmag D62 diesel hammer to a predetermined set to check the required pile bearing capacity of 1200kN.

At the same time Per Aarsleff started on the main quay frontage combiwall, but working in 4m to 11m depth of water from a 55m long spud leg barge equipped with a 200t Liebherr HS895 crawler crane. Using the same deadmen support and piling template frame concept, the site team pitched and drove the largest 1.62m to 1.67m diameter tubes to about 5m to 8m above final penetration level using a larger ICE1412 vibrator. The main template was then removed and replaced with a similar special frame spanning three piles to prevent the centre pile rotating when striking to final level with an hydraulically operated IHC S-150 accelerated hydrohammer. About 25 piles were each driven to completion in turn leap-frogging the frame. If any of these piles did not achieve the required 8,000kN design bearing capacity Per Aarsleff had to go back later and restrike and recheck. Only when all the group of 25 piles had reached the design capacity could Per Aarsleff’s team install the 22m long pairs of interlinking sheet piles. The sequence is then repeated until completion of the main 480m long combiwall.

“To my knowledge this is the largest tubular profile combiwall and certainly one of the longest Per Aarsleff has installed,” says Per Aarsleff deputy site manager René Mølgaard Jensen. “And 20m behind this main 380m long part of combiwall frontage we also have to install, using the same equipment, a row of normal 1.22m diameter tubular piles up to 42m long and capable of taking 6,900kN and a row 15m behind the remainder of 1.02m diameter tubes. These two back rows are spaced to accommodate the gauge of the container crane tracks. All the tubes are driven through a mixture of mud, silt, silty clay, moraine and weathered blue clay to toe into the underlying blue clay.”

While one team is installing the combiwall another Per Aarsleff team is placing about 65,000m3 of material to build the breakwater in water depth up to 11m on a seabed slope of 1:2 at the coastline dropping to 1:4 at the toe. The 800m long breakwater is being built round a central core of a geotextile faced limestone retaining bund, about 4m high. Sea dredged sand is piled up behind on the inner face while a 2m thick slope protecting rock armour layer is accurately placed on the front face, crest and to the top of the sand level. Armour placing follows closely behind the limestone core to minimise any erosion during construction. Per Aarsleff is using a pair of hydraulic excavators fitted with rock grapples in place of their standard buckets and equipped with global positioning systems. This enables the excavator operators to work independently and very accurately position the rock armour without the need for constant surveying by engineers.

During combiwall and breakwater construction Per Aarsleff’s joint venture partner Rohde Nielsen is using four different hopper dredgers Thor R, Magni R, Trud R and Gefion R to excavate sand from a designated area about 20 nautical miles from the port. Travelling back and forth the dredgers are steadily placing the hydraulic fill into the partially completed basin, including an additional 1.8m to 2.7m high surcharge needed to assist with achieving the predicted settlement of 0.8m to 1.7m and consolidation of 95% of refusal density. Settlement at contract handover early in 2010 should not exceed 200mm.

The weight of the fill is loading the underlying soft clay and with the clay’s slow permeability of the contained water Per Aarsleff is inducing settlement by peppering the fill area with about 50,000 to 60,000 vertical drains into the underlying clay. The 34m long drains are being inserted on a 1m triangular grid by the specialist Netherlands contractor Wicks. Pore pressure of the clay is being constantly monitored and settlement observed using simple vertical rods with end plates driven down to rest on top of the clay layer.

Per Aarsleff was in areas faced with the difficultly of not having the time to place more drains closer than the 1m grid and get the required settlements close to the combiwall in the contract period. Fortunately Per Aarsleff has found an alternative way of accelerating the settlement. The contractor has to place two rows of staggered concrete anchor blocks at 40m and 50m away from the main combiwall and anchor each circular pile with long steel rods back to the blocks. These 3m long and 2m high blocks have to be placed in shallow trenches in the fill and to achieve this Per Aarsleff has installed some horizontal drains and pumps to dewater the area to allow safe excavation.

“By lowering the ground water level in the zone of the combiwall for a certain period we are able to speed up the settlements as the weight of the dewatered sand becomes more efficient. And before we can dredge outside the combiwall and increase sea level to 15m we have to consolidate the fill to 90% of primary consolidation, otherwise the combiwall would be unstable and at risk of collapse,” says Per Aarsleff site manager Per Midjord. “The combination of the vertical and horizontal drains is reducing the water table by 3m and accelerating the consolidation. This has so far been key to the success of the project, otherwise we would have needed three times more vertical drains, which we couldn’t have installed within the contract period.”

When the fill has been consolidated and the combiwall completed, Per Aarsleff’s other joint venture partner KMG will then cast insitu longitudinal concrete capping beams along the tops of the two parallel rows of piles together with an adjoining post tensioned capping slab. Container crane rails will be fixed on top of the capping beams together with fixing the necessary berthing fenders and mooring bollards to the outer combiwall. After completion of the concrete superstructure the final part of the project will involve the excavation and dredging of about 570,000m3 of material by Rohde Nielsen A/S from the seabed in front of the main combiwall, increasing water depth to 14.5m to accommodate the berthing container ships.

Despite some initial delays at the start of the project and the current loss of about 15% of the time due to poor weather, the joint venture anticipates finishing its 18-month contract on schedule in January 2010. Muuga Port is then expected to bring in other contractors to pave the reclaimed terminal area and erect and commission the new container handling cranes. 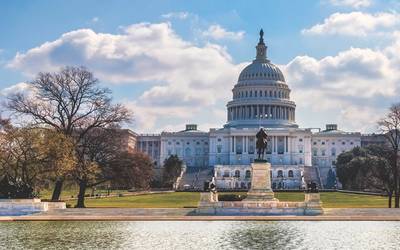