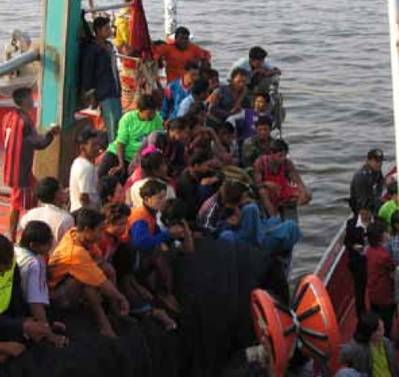 The findings of the ILO's Tripartite Action to Protect the Rights of Migrant Workers research indicate low compliance with Thai immigration and labour laws, and reveal significant gaps when measured against the relevant international standards on work in fishing. In addition, a considerable proportion of the fishers surveyed were found to be in exploitative situations, either employed through deceptive and coercive labour practices, working long hours for little pay, or working under age.

The ILO’s Tripartite Action to Protect the Rights of Migrant Workers within and from the Greater Mekong Sub-region (the GMS TRIANGLE project) partnered with the Asian Research Center for Migration at Chulalongkorn University’s Institute of Asian Studies to conduct a large-scale survey of employment practices and working conditions within the commercial fishing sector in four major port areas of Thailand.

The research was carried out in close consultation with the Ministry of Labour, the Department of Fisheries, the National Fisheries Association of Thailand, the Thailand Overseas Fishing Association, and other relevant government and civil society stakeholders, the study benefitted greatly from strong support provided by the ILO’s tripartite constituents.

However, in its findings the report notes that a significant proportion of the sample did not appear to be in an exploitative situation. Nearly 62 per cent of respondents reported not having faced a serious rights violation, and over half of the sample intended to continue working with their current employer. Most employers state that they would not have a crew if they treated them badly,as workers regularly change boats and advise other fishers to avoid certain skippers. That said, the changing of boats is a lot easier when working in coastal fishing, rather than deep-sea fishing.

The full report is available at: http://www.ilo.org/wcmsp5/groups/public/---asia/---ro-bangkok/documents/publication/wcms_220596.pdf