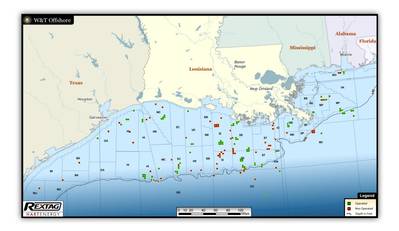 At about 10:00 a.m. on the morning of September 26, 2012, a fire started on the W&T Ship Shoal 233 B Platform and was subsequently extinguished at 11:35 a.m.  This production processing facility, which is operated by the Company, is located approximately 30 miles south of Louisiana in the Gulf of Mexico, in 128 feet of water.

To respond to this incident, the Company activated its emergency response plan, evacuated personnel and mobilized equipment and personnel to assess and address the incident.  All appropriate government agencies were notified.

There were three personnel on the platform, and all three were safely evacuated. One person suffered minor injuries was treated at a local hospital and subsequently released.

As a result of the incident, less than two barrels of light oil was discharged into the water which created a sheen.  At this time, the sheen appears to be quickly evaporating.  The platform has been safely shut-in.

Initial findings by the Company indicate that the fire was caused by a leaking connection on the vertical heater treater; however, the Company will do additional investigation to determine the root cause of the equipment malfunction.  Furthermore, all safety equipment functioned properly during the shut-in phase of the response.  Production will be restored once all repairs and maintenance can be performed.