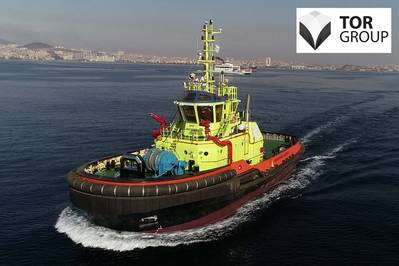 The new tugs are equipped to fulfill a multitude of missions for the GPHA, including but not limited to ship-assist, fire-fighting, and pollution response, said a press release from the ship designer.

"Driven by high speed engines and Z-drive propellers, the Ben Owusu-Mensah and its sisters comfortably meet all contractual performance requirements, including the achievement of 82 tonnes of bollard pull and speeds in excess of 14 knots on trial," it said.

Each of these tugs is equipped for GPHA’s ship-handling and towing needs, with a Kongsberg hawser winch forward, with 225 tonne brake holding load, and a 100-tonne safe working load Mampaey tow hook mounted to a tow post aft.

Main propulsion machinery is comprised of the first Cummins QSK95-M engines used in a tug application, each delivering 2,560 kW at 1800 rpm, and driving 2.8 meter diameter Kongsberg US255S P30 fixed pitch Z-drives. Electrical power is generated by a pair of Cummins QSB7 gensets, each capable of producing 136 ekW at 50 Hz.

The Fi-Fi 1 class off-ship fire-fighting system is powered by a dedicated Cummins QSK38-M1 engine, driving a single 2,750 m3/hr Marsis fire pump. A pair of Marsis water and foam capable monitors are mounted on the forward deckhouse top and include fog/jet nozzles. A water spray system is also outfitted.

In addition to their primary ship-handling and fire-fighting duties, the tugs feature tankage for recovered oil, with a corresponding oil recovery notation. A Heila 25-2S folding knuckle boom crane on the aft deck of each tug provides additional utility with 8.6 meter reach.