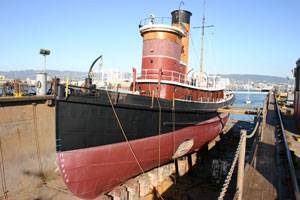 The 102-year old steam-powered, ocean-going tug, Hercules, is in dry-dock at Bay Ship & Yacht Co.’s Alameda yard for maintenance and repair work. Earlier this month she was towed across the bay from her berth at the Hyde Street Pier of the San Francisco Maritime National Historic Park, operated by the National Park Service.  She will be in dry-dock at BS&Y for about a month for sandblasting and painting the riveted steel hull, replacing the boat deck, and other maintenance work at an estimated cost of some $500,000.

The sea-going tug is 156-ft long, with a beam width of 35-ft and a draft of 18 ft.  According to Fred Sheppard, facility manager for the Historic Park, “she is a really beautiful piece of machinery.”  She was powered by a three-cylinder, triple-expansion steam engine that is still operational.  The tug required a crew of 15: three firemen, three oilmen, a chief and two assistant engineers, three deckhands, a cook, two mates, and a captain.

Built in Camden, N.J. in 1907, the Hercules towed her sister tug through the Strait of Magellan around South America to San Francisco.  There, she joined the Red Stack Fleet and towed barges, sailing ships, and log rafts between Pacific ports for many years.  Eventually, the Hercules ended up with the Western Pacific Railroad towing railroad-car barges across San Francisco Bay.