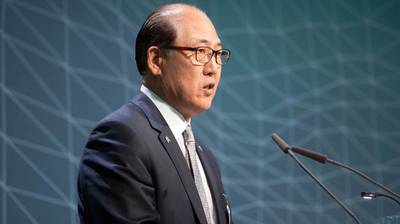 The International Maritime Organization (IMO) has taken its second step towards a global climate agreement for shipping. After a week of negotiations, the member States return with much homework before the final negotiations in April 2018, when the initial strategy is to be adopted.

The IMO member States agreed this summer on a structure for the initial climate strategy involving, inter alia, the setting of a vision and a level of ambition for the efforts to be made globally to reduce shipping’s contribution to greenhouse gas emissions.
During this week’s negotiations, the IMO has embarked on the specific contents of the strategy. Major outstanding issues continue to be how to specifically formulate the Organisation’s climate vision and level of ambition in this area. '
More progress has, on the other hand, been made with the consideration of specific reduction measures in the short, the medium and the long term, which may, inter alia, result in stricter requirements for ships’ energy efficiency.
Director General Andreas Nordseth from the Danish Maritime Authority said: "I am pleased about the progress made in the negotiations during this week’s meeting in London. We on the Danish side are still striving to reach an ambitious agreement on shipping’s contribution to reductions of greenhouse gas emissions.”
The result of this week’s negotiations is a text with several different elements and possibilities as regards the vision, level of ambition and reduction measures. Each individual member State will have to work on these elements up to the final negotiations in April 2018.
Andreas Nordseth said: " It is decisive that we achieve global solutions to the climate challenge. That will require debate on a wide range of issues some of which are quite challenging, but which the 172 IMO member States must reach an agreement on. As expected, this week's negotiations have indeed been difficult, an will continue to be so during the final phase in April next year. On the other hand, it is very positive to see many member States as well as both industry and NGO's pushing for a high level of ambition. Now, we need to keep the intense efforts up in order to achieve an ambitious strategy which will demonstrate the continued determination of the IMO to reducing greenhouse gas emissions.”
The entire text is to be considered once again in April 2018 with a view to adoption of the initial strategy in connection with the next session of the IMO Marine Environment Protection Committee (MEPC).
In 2016, the IMO decided that the final climate strategy is to be adopted in 2023 and that the initial climate strategy for shipping is to be ready in 2018.
The IMO has for many years been working on technical measures to promote shipping’s energy efficiency, and in 2011 the Organisation established standards for new ships’ energy efficiency. Recently, the IMO has decided that, from 2019, ships must submit information to the IMO annually about their total fuel consumption, distance travelled and period spent at sea.​