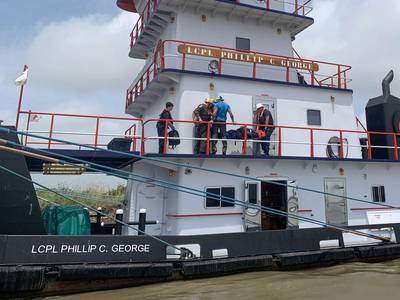 An ailing crewmember was medevaced from a towboat near Chocolate Bayou, Texas, Thursday.

The U.S. Coast Guard said its watchstanders at Sector Houston-Galveston command center received a report at 10:58 a.m. from the captain of the towboat LCPL Phillip C. George stating a 50-year-old crewmember on board was unconscious and experiencing symptoms of diabetic shock. Watchstanders consulted with the duty flight surgeon, who recommended a medevac.

The boat crew arrived on scene, administered first aid and assisted in bringing the unconscious crew member to the top deck to set up for a hoist. The Dolphin crew rendezvoused with the towboat, hoisted the passenger and transferred him to the University of Texas Medical Branch at Galveston in stable condition.