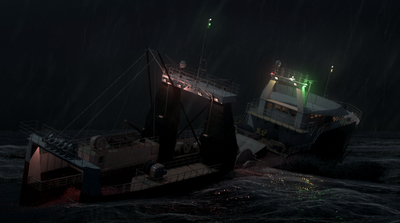 On the night of March 23, 2008, most of the crew sleeps while fishing vessel Alaska Ranger makes her way to the rich fishing grounds off the coast of Alaska. As the Engineer makes his nightly rounds, he discovers a serious flood in the rudder room. He raises the alarm and the captain issues a Mayday call. But before the crew can investigate the source of the leak, the rising water reaches their electrical systems and the ship loses power. With the ship listing and in danger of sinking, the captain orders the crew to abandon ship. But when they launch the life rafts, they seem to shoot forward instead of staying beside the boat, making it nearly impossible to get on board. More than half the crew ends up floating in the frigid waters of the Bering Sea.

US Coast Guard rescuers race to get to the Alaska Ranger, but it’s in such a remote location that by the time they reach them the survivors are spread out over a wide area of ocean - making the rescue that much more complicated. Helicopters, a USCG cutter, and Good Samaritan ships all take part in the massive rescue effort, which will become the largest cold water rescue in US Coast Guard history. After hours of effort, forty-two of the forty-seven-man crew are saved. Five others have perished, including the Captain.

The US Coast Guard immediately launches a Marine Board of Investigation to determine what went wrong and why. It’s clear there was a breach in the hull that flooded the engine room, but there are many other questions. What caused the breach? And why did the life boats drift away from the ship so quickly?

Facts about the Alaska Ranger:

Behind the scenes: director’s cut
“The pain is too much, everything’s too much, I’m just going to open my suit and let the water rush in and take me down”. Watch Disasters at Sea director PJ Naworynski discuss inside stories about filming “Deadly Neglect”, the stories and characters who stand out to him, and some of the best moments that almost didn’t make the cut.

DISASTERS AT SEA is an original new docuseries airing on Tuesdays at 10 p.m. EST on Discovery Canada (US viewers can check out Smithsonian Channel). Each episode of DISASTERS AT SEA tells the unimaginable true story of a maritime disaster, combining harrowing re-enactments with expert analysis from marine investigators. Whether it’s survivor testimony about a sudden sound, GPS data about the ship’s speed, or the scatter pattern of wreckage at the bottom of the ocean, each piece of evidence helps investigators build a dramatic picture of the deadly chain of events

A Japanese destroyer and a Chinese fishing boat collided in the East China Sea on Monday night and no one was injured, Japan’s defense minister said, but China said…