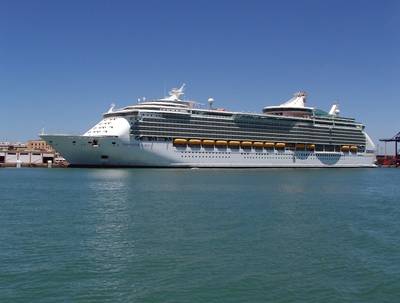 Solar Solve Marine has received a number of recent orders for its class approved roller screens to be installed at the navigation bridge windows on cruise ships. One significant contract was for Royal Caribbean Cruises Navigator of the Seas – a Voyager Class Cruise Ship.

Her keel was laid at Aker Yards, Finland in 2000 and the ship was launched in 2002. She is 138,279 GT and can carry 3,114 passengers plus additional crew, with a length of 1,020 feet and beam of 157.5 feet she is still one of the largest cruise ships in the world. More than $8.5 million of art is displayed in stairwells and public area throughout the ship.

SOLASOLV sunscreens have also been installed on Cunard's flagship the Queen Mary 2 and Silverseas Cruises Silver Explorer, an expedition cruise ship designed for navigating waters of the most remote locations, while offering refined comfort and luxury.

Solar Solve specializes in providing sun and glare protection for the marine and offshore industry, and SOLASOLV anti-glare screens are installed at the windows of all types of ships, rigs and cranes worldwide. Regarded as an essential safety product, they effectively reject up to 87% of heat and up to 93% of glare from the sun to significantly reduce eye-strain. Visual displays are easier to read and a clear outward view is maintained for safer navigation and marine operations. A more comfortable working environment means the ships’ crew are less prone to fatigue which can cause human error. Suitable for newbuilds and retrofits, SOLASAFE screens are guaranteed for seven years and Type Approved by Lloyds, ABS and DNV.

Carl Johnson, Operations Director at Solar Solve commented, “We have just supplied fifteen SOLASAFE sunscreens to this prestigious ship which was once the largest ship in Royal Caribbean’s fleet. Royal Caribbean has been a customer since 1996 and this latest order confirms their continued trust in the SOLASOLV brand which is very satisfying news for our company.”