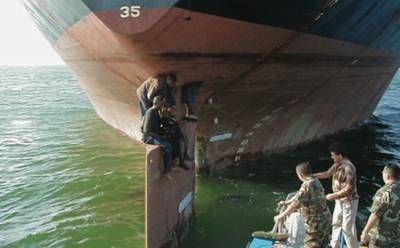 There have been changes in the way authorities deal with stowaways in South African ports, now making the ship responsible for preventing unauthorised personnel from boarding in the first place, the UK P&I Club informs. If immigration decide that any person illegally on board is a stowaway then the vessel will be liable for all the costs and consequences of repatriation.

Over the past two weeks, three cases have arisen involving stowaways and it appears that the local immigration authority has changed the approach it takes with regards to stowaways found on board ships in Durban whilst moored in the port.

In each of the cases, the vessel was in port and either carrying out cargo operations or carrying out a stowaway search prior to departure when illegal people were discovered on board the vessel. Immigration were called to the vessel and in each case, the illegal’s were declared to be “stowaways” by Immigration rather than what were previously called "trespassers".

The Immigration Department has advised that the obligation rests on the vessels to ensure that only authorised people are allowed on board the vessel and that it is the duty of the gangway watch to check that each person coming on board the vessel has a Transnet port permit.

If the person boarding the vessel, including stevedores, agents, ship chandlers, cleaners, immigration, ship repairers and contractors, does not have a Transnet permit (as shown above) then the person should be asked to leave the vessel and if necessary, taken to the bottom of the gangway and port security notified. The port, as the landlord, will have the person detained and charged as a trespasser on their property.

If the illegal person is declared to be a stowaway by Immigration then the vessel will be liable for all the costs and consequences of repatriating that person.

The UK P&I Club advises its members to ensure that vessels calling at Durban maintain a proper and effective security watch and to ensure individuals without a proper Transnet permit are not permitted access to the vessel.