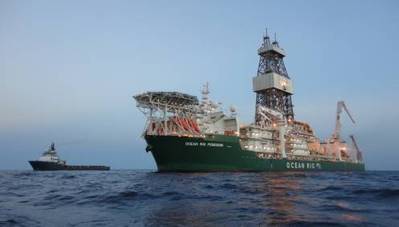 Offshore oil drilling and service companies, hurt by the energy industry's shift to lower-cost shale and away from deepwater projects, are dominating the year's energy bankruptcies in North America, according to law firm Haynes and Boone.

There were fewer oilfield service companies seeking protection this year than last but those that did have had larger debts. Through October, 44 oilfield services companies filed for bankruptcy in the United States and Canada owing creditors $24.8 billion, compared with 72 companies and $13.48 billion for all of 2016.
Just two offshore companies accounted for 45 percent of the total owed creditors this year, the law firm's figures show. Deepwater offshore services firm Seadrill Ltd's September filing was the largest bankruptcy this year with $8 billion in debts, while Ocean Rig UDW Inc filed owing $3.6 billion.
On Nov. 12, another offshore driller, Pacific Drilling, filed for bankruptcy protection with $3.2 billion owed to creditors. That filing was not included in the survey.
Oil prices have rebounded this year with the U.S. benchmark up 22 percent in the last 52 weeks to about $55 a barrel. That gain has stirred onshore drilling and production but has not been enough to boost the more costly offshore and deepwater drilling.
"If you're going to get $50 a barrel oil you want the cheapest way of getting that barrel and offshore isn't it," Ian Peck, chairman of Haynes and Boone's restructuring practice group, said in an interview.
The law firm's survey of energy bankruptcy filings in the United States and Canada also shows a sharp reduction this year in the number of bankruptcy filings by oil and gas producers and by energy pipeline and storage firms.
Twenty North American oil and gas producers have filed bankruptcies so far in 2017 owing creditors $5.6 billion, down from $56.8 billion owed across 70 filings for all of last year.
"The noise has died down quite a bit on the producer side," Peck said.
Only four energy processing, transportation and storage companies have filed for bankruptcy through October, with debt totaling $2.71 billion, compared with 13 filings in all of 2016 for a tally of $11 billion. There were no bankruptcy filings by North American gathering, transportation and storage firms since April, the law firm said.