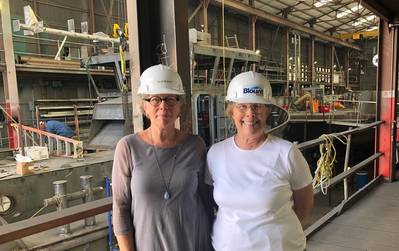 Maritime Reporter & Engineering News recently visited the Blount Boats facility in Warren, Rhode Island. The year 2019 might be the ‘year of the woman’ in the eyes of the IMO, but the two women at the head of Blount Boats – Julie & Marcia Blount (pictured) – have been a driving force in the U.S. boatbuilding market for decades, building on the business that their father Luther Blount built starting in 1949.

As 2019 is Blount Boat’s 70th anniversary, a full story on the yard, it’s history and evolution will appear in the October 2019 edition of Maritime Reporter & Engineering News, our own 80th Anniversary edition following our founding in 1939.

Blount Boats is a progressive yard, investing in its facilities with plans for growth across various sectors, particularly the prospect of building boats for the burgeoning offshore wind market in the Northeast United States. For a quick update on the yard, see their story in the recent “shipbuilding” edition of Maritime Reporter: https://magazines.marinelink.com/nwm/MaritimeReporter/201908/#page/50