Britain to Iran: "come out of the dark" 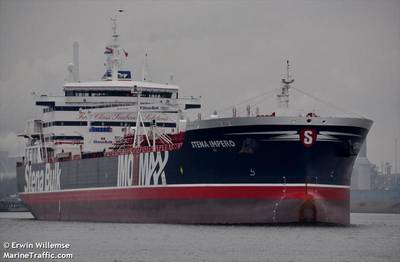 The Stena Impero, seized by the Islamic Republic, remains in their custody.Image Credit: MarineTraffic.com / © Erwin Willemse

Britain on Monday warned Iran that if it wants to "come of the dark" then it must follow international rules and release a British-flagged vessel seized by the Islamic Republic in the Gulf. UK rejects 'barter' for release of Iranian Tanker.

"If the Iranians want to come of the dark and be accepted as a responsible member of the intentional community they need to adhere to rules-based system of the international community," Foreign Secretary Dominic Raab told Sky News.

Also on Monday, Britain rejected the idea that it could release a Iranian tanker in exchange for a British-flagged vessel seized by the Islamic Republic in the Gulf.

Tensions have spiked between Iran and Britain since after Iranian commandos seized a British-flagged tanker earlier this month. That came after British forces captured an Iranian oil tanker near Gibraltar, accused of violating sanctions on Syria.

"There is no quid pro quo," Foreign Secretary Dominic Raab told BBC radio. "This is not about some kind of barter. This is about the international law and the rules of the international legal system being upheld and that is what we will insist on."