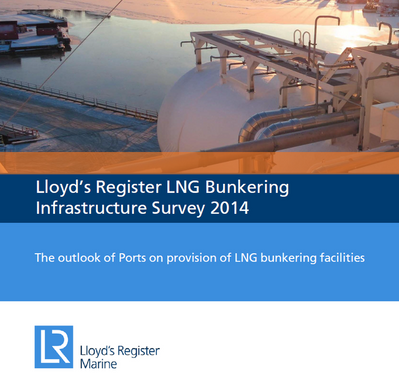 Lloyd's Register’s (LR) LNG Bunkering Infrastructural Survey 2014 indicates that major ports around the world are either planning for, or are anticipating, the wide-scale development of LNG bunkering. 22 ports were assessed in the analysis with 18 key questions addressed.

LR explains that this latest analysis builds on the Lloyd’s Register LNG bunkering Infrastructure Study completed in 2011. Shipowner demand, unsurprisingly, remains the biggest driver from the ports’ perspective but availability of LNG infrastructure has risen from being considered a low priority to the second most important driver after demand. Pricing is third. Most ports surveyed are in the North American and European emission Control Areas (ECAs).

Latifat Ajala, Lloyd’s Register’s Senior Market Analyst comments, “Global ports are gearing up for a gas fuelled future for shipping. Now we can clearly see that the development of bunkering capability is going to be a vital driver for take up of LNG by deep sea shipping."

China's exports of clean marine fuels rose in December to a record since shipments began a year ago, taking 2020 exports…