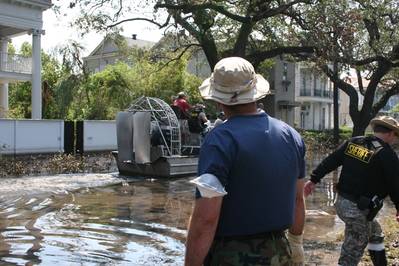 In the small city of Houma, Louisiana, about an hour southwest of New Orleans, volunteer rescue workers with a “Cajun Navy” group struggled in the wee hours of Monday to navigate streets strewn with trees toppled by Hurricane Ida's ferocious winds.

The group had sped down from Lafayette after getting reports of people trapped by the fierce storm's floodwaters. Rob Gaudet, a 52-year-old software developer from Baton Rouge, fielded dozens of distress calls about hard-hit communities.

"If they can get on the roof, that’s better. You don’t want to be in the attic when the water is rising," he told a caller worried about two older women stuck in waist-deep water in LaPlace, to the northwest of New Orleans.

The Cajun Navy, a term coined to describe volunteer boat owners who helped with rescues in the wake of 2005's Hurricane Katrina, has become a familiar presence at U.S. natural disaster scenes. Neither trained first responders nor medical professionals, they show up with the basic goal of helping get people out of immediate harm's way.

A group of four men from Texas and Georgia piled into two full-sized trucks after midnight on Monday to offer assistance in Houma, which saw massive wind damage but no major flooding. They found the working-class town draped in power lines, fallen signs and billboards. Many roads were impassable.

It took them nearly an hour to travel a few blocks through the maze of downed wires and trees to the Lake Houmas Inn.

Once there, they couldn’t locate the relatives of the person who had called them for a rescue.

But they did find a 60-year-old woman who said she had fallen down a flight of steps at the height of the storm, gashing her head and injuring her neck. One of the volunteers, Pete Sterk, waded through about a foot of water in the parking lot to reach her downstairs room.

He said she and her husband had fled to the inn after losing their home in the hurricane. She told him she had fallen when management came running to evacuate her from an upstairs room as Ida was ripping parts of the second-floor roof off the building. A large section of the roof lay near the front of the small, L-shaped structure.

Sterk, 40, who drove from the Austin, Texas, suburb of Georgetown to help, could only do so much.

After making the injured woman a makeshift neck brace and seeking to calm her, he told her she couldn’t be transported for medical help until morning. EMS services had been suspended until dawn because of the treacherous conditions of the roadways.

The volunteer rescuers then headed to a nearby Wal-Mart parking lot to strategize their next steps after sunrise.