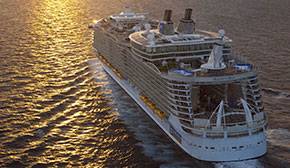 Oasis of the Seas (Photo courtesy of Royal Caribbean International)

Shares of the world's second-largest cruise operator rose as much as 9.1 percent to a life-high of $61.35.

European cruises account for 22 percent of the capacity in the company, whose cruise lines include Royal Caribbean International, Celebrity Cruises and Azamara Club Cruise.

Royal Caribbean, which in April warned of pricing pressure in its biggest market, the Caribbean, said the environment in the region remained "promotional".

The promotional environment is said to be led by Europe-based MSC Cruises, which is offering seven-night Caribbean cruises for as low as $199.

Royal Caribbean and Carnival have been bogged down for two years by a series of adverse events such as virus outbreaks and engine fires.

Royal Caribbean is set to launch its ship, Quantum of the Seas, which features simulated skydiving, bumper cars and roller skating.

"I don't think we've ever had a new ship where the early bookings have been so powerful," he said.

Royal Caribbean would also double its capacity in China from about 6 percent, Fain said.

"They're extremely confident in their numbers and this is minimal risk. They're going to get a strong return, there's no doubt about it," industry analyst Stewart Chiron said about the company's expansion plans in China.

Royal Caribbean said net yields, which include ticket sales and spending on board, rose 2.6 percent in the second quarter ended June 30, excluding the impact of currency fluctuations.

"Double-digit yield improvement on European and China sailings is helping offset a continued promotional environment in the Caribbean," the company said on Thursday. [ID:nPn5QjnVl

Analysts on average had expected earnings of 52 cents per share on revenue of $1.99 billion, according to Thomson Reuters I/B/E/S.

Royal Caribbean shares were up 8.3 percent at $60.91 on the New York Stock Exchange in afternoon trading.