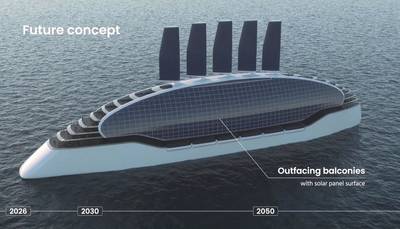 Norway on Jan. 1, 2026, will begin a ban on cruise ships powering through the Unesco-listed heritage fjords on anything but zero-emissions propulsion. For now, that means battery power, but few of the 190 cruise ship calls to these fjords are made with that kind of electro-chemical fuel on board. From now until 2026, you can still cruise the fjords on a closed-loop, or in-line, scrubber system, but few cruise ships have these installed. The new rules mean cruising elsewhere, finding suppliers of energy storage systems or accepting novel zero-emissions solutions.

Western Norway’s UNESCO-designated Geiranger and Naeroy fjords start at the sea and terminate in picturesque villages, where a cloud of exhaust from visiting cruise ships tends to hang.   The plumes of visible emissions of particulate matter, carbon-dioxide, sulfur dioxide, nitrogen oxide and water vapor have been studied at length, and now the Norwegian government has had enough: The polluting ends Jan. 1st, 2026, and by 2030, the remaining Norwegian fjords will be made emissions-free zones.

The studies by DNV GL, Marinetek and Sintef reveal that just 25 percent of cruise ships entering the fjords are running low-SOx and low-NOx systems aboard, including scrubbers. Most are on cleaner, low-sulfur distillate fuels for main and auxiliary engines, and about 10 percent run on bunker; 70 percent of cruise ships entering the protected fjords were built, on average, 20 years ago and lack the newer, greener tech.

It was a 2018 Norwegian government debate on the embarrassing fjord clouds that led to the new zero-emissions ban on fossil fuels in passenger ships over 1,000 GT. The Norwegian Maritime Authority in coastal town Haugesund that will enforce the requirement that cruise calls in the fjords are electric-only. The NMA will also enforce the use of closed-loop exhaust scrubbers until 2016. Until then, too, European Emissions Control Areas rules for NOx and SOx will apply above Norway’s 62nd parallel of latitude (including the half of Geiranger fjord nearest the sea).

“It’ll definitely impact the (cruise industry),” says the NMA’s head of delegation to the IMO, Lars Christian Espenes. “It could be difficult for cruise ships, as only a handful are compliant.” He confirms that it’ll be battery power only or hybrid from 2026 on, admitting that “few are prepared” for the changes. That’s great news for Norway-based power-system integrators like Siemens, ABB, Kongsberg Maritime (formerly Rolls-Royce Marine) and a range of others with containerized or compartmentalized energy storage systems, or ESS, a battery or hybrid ships power and propulsion solution. Integrating battery power is also great for Canada-rooted battery outfit, Corvus Energy, a newly integral part of western Norway’s maritime clusters.

One of those industrial fora is NCE Maritime Cleantech, proponent of local zero-emissions designs that including two key frontrunners: a sail-rigged cruise ship and a temporary cruise-ship-in-tow solution. 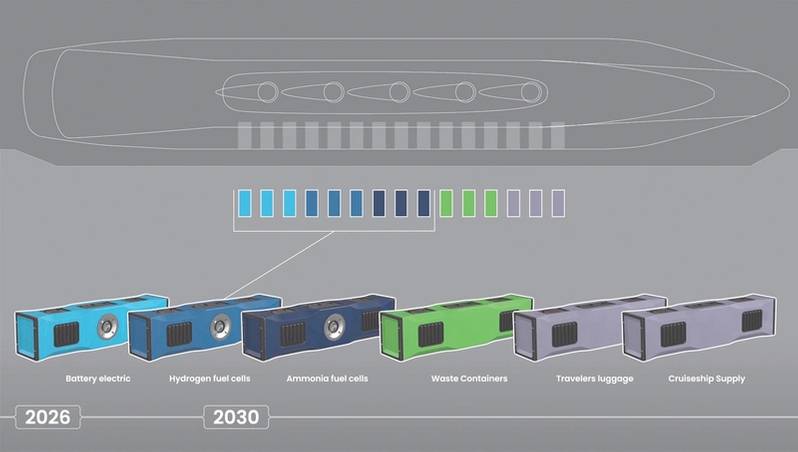 Visuals presented at the Miami trade show in April suggest the battery-laden “fjord pilot” could be the interim solution for fjord-going cruise vessels: batteries aboard the AHTS ship by 2026 ahead of new battery and other designs for cruise by 2030. The aim is to have the cruise ship in hotel mode, with hotel power streamed over from the AHTS. Technology now used to charge batteries at harbour would effect the power transfer under new harbour systems, now on the drawing board, are developed.

The sail-equipped cruise ship would be ready by 2030. It’s designer, understood to be industrial designers, Eker Design, have developed the concept in cooperation with cruise heavyweights, Carnival and Royal Caribbean. Other Maritime Cleantech suppliers have also gotten onboard. The key to these “sale-and-solar” designs is ESS, with batteries this time charged by photovoltaic cells imbedded in 5,000 square meters of sails. All passengers are envisioned having their own balconies surfaced with solar-filmed glass.

Clean sailing
While we’ve seen and walked around the containerized ESS from three different suppliers and power-system integrators, the sail, solar and battery cruise concept envisages a novel exchange of power and service containers for each onboard process: “packs” for energy (batteries); kitchen waste; potable water; passenger waste; recycling and luggage. All would be emptied or exchanged shoreside and replaced with fresh packs — energy or service. The energy packs are key, as battery, hydrogen and ammonia fuel cells are envisaged. It is hoped the energy “cycle” of containerized ESS, solar and sail power provide 14 days of “clean sailing” through the fjords.

In the six-and-a-half years before the zero-emissions deadline, cruise vessels will only be allowed into the inner fjords if they’re running closed scrubber technology, or tech that doesn’t dip or release into sea water or surrounding air to do the job. Norway-based exhaust scrubber makers offer open and closed scrubber systems in the run-up to the Heritage Fjords deadline. Last year saw a ramp-up of systems production that failed to meet demand, as it surges ahead of the IMO’s Jan. 1st, 2020 deadlines for getting the SOx in emissions down to 0.5 parts per million.

“As far as we know, the regulation concerns the so-called Heritage Fjords, where a zero-emission policy will be implemented from 2026,” says a maker of scrubbers for ocean-going tankers, cargo vessels and cruise ships. “This means no fossil fuels can be used by any vessel inside these fjords … (cruise vessels) all use fossil fuels (so) they simply cannot enter these fjords from 2026”. Another scrubber maker says their systems are too large for cruise, “because you’d have to remove a casino or a pool”.

So, the Fjords clean-up may be strictly about marine batteries. Retrofits of these, at least for AHTSs, can seem as simple or as configurable as a Kongsberg Maritime battery “container” connected to a hub. The no-emissions rule (which includes “grey water” and waste), will turn an ugly problem into a unique opportunity for the local shipping cluster and allied international partners to take a market lead.
The NMA affirms this: “We take a very strong role in creating international regulations,” says NMA spokesperson, Caroline Stensland. The 350-strong agency headquartered in Haugesund works with industry on new tech much like DNV GL does, and their own engineers and scientists work alongside maritime cluster participants. “That sets us apart from other national maritime authorities,” she says. “We see ourselves as partners for technology development.”

Key to that development are the system integrators, “clustered” and incubated by Maritime CleanTech and government. As we went to press, the NCE was showing the Cluster’s zero-emissions concepts to conferencegoers at SeaTrade Cruise Global in Miami. “The world’s first zero-emissions zone (Norway’s heritage fjords)” and the heavyweights of cruise will have their first zero-emissions, solar-sail-ESS between by 2030. Until then, it’s cruise ships in-tow.

Corvus’s Cruise Offering
Corvus Energy’s batteries are understood to be at the heart of the solar-sail cruise concept and a temporary plan to use retired anchor handlers packed with batteries to tow passenger vessels through Norway’s fjords. 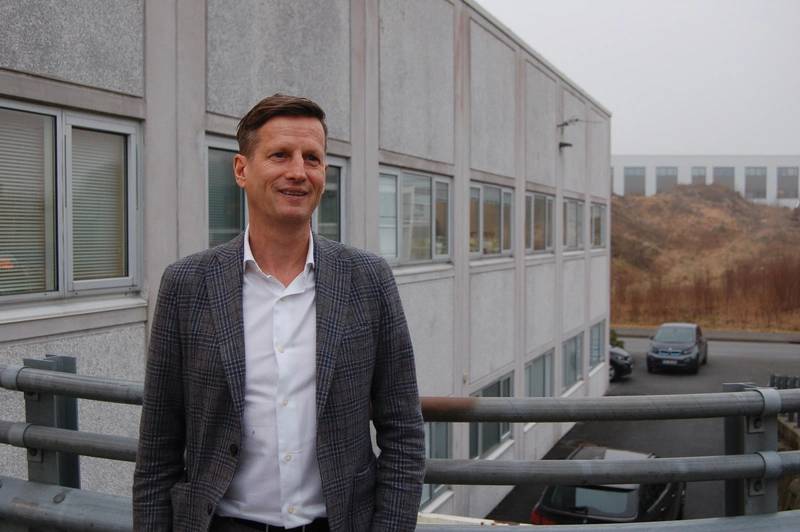 Halvard Hauso, executive VP at Corvus Energy, confirms the ESS outfit is ramping up for the cruise segment. “We’re launching a battery system for each vessel type,” he says, confirming that batteries let owners shrink engine sizes. Hauso’s comment is timely — a cruise vessel recently thundered through the nearby fjords on main engines packing 120 megawatts of power.

Already, Corvus Energy’s ESS is slated to be aboard vessels of the cruise ship operator, Havila Kystruten. The liners will operate from Bergen in Western Norway to Kirkenes in the near arctic. That success, the largest marine battery order ever, is being followed up with a new series of battery packs expected to launch at Norway’s Nor-Shipping expo in June 2019.

With 200 MWh of installed power, Corvus may already have half the market for marine battery power. Now, moving operations from Canada to Scandinavia and securing a network of Norwegian owners has proved prescient. Competitors have fallen away. It was the logistical costs and bans on air-lifting tenable chemicals that had padded the logic of setting up in Norway.

New Corvus product launches for specific shipping segments are being rolled out named for ocean mammals that denote scale: cruise is understood to be called the Blue Whale package. Orca is understood to be for adventure cruise or yachts. “We decided on the (blue) whale format of ESS because it was too big for yachts and too small for rigs,” Hauso says, admitting that quietly, Corvus has had 190 energy storage projects on the go, including 13 in the cruise and yacht segment.

The newest Corvus ESS are solid-state rather than gelatinous, and that has reduced the size of the company’s new Orca system for ferries by half. The Blue Whale system, which will have power and coms controls moved to the cabinet, are being offered to the cruise market with unique chemistry made by different suppliers.

Blue Whale marine ESS will roll out to the cruise market in earnest by 2021, or just in time for Norway’s 2026 Fjords rules and a year after MARPOL emissions rules kick in. As Hauso says, power configurations for cruise will mean ESS becomes “as a fuel, with more batteries.”