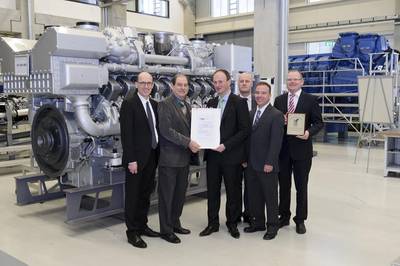 As the first engines in its power class the MTU Series 4000 was recently awarded Naval Vessel Rules (NVR) certification by the American Bureau of Shipping (ABS). The new ABS NVR certification, a requirement for the U.S. Coast Guard’s Fast Response Cutter (FRC) program, was awarded after 1,500 hours of testing of the 20V 4000 M73 that included extensive run times at 110% of the engine’s rated power in a variety of extreme environmental conditions. Extensive validation testing was also completed in commercial marine and military applications, further demonstrating the versatility and durability of the Series 4000. The latest certification joins the Series 8000 in the engine portfolio of the Rolls-Royce Power Systems company MTU with ABS NVR certification.

“The NVR certification of the Series 4000 engine is another milestone in our long and distinguished history of providing power and propulsion systems to navies around the world,” said Knut Mueller, Vice President Governmental Sales at MTU Friedrichshafen GmbH.