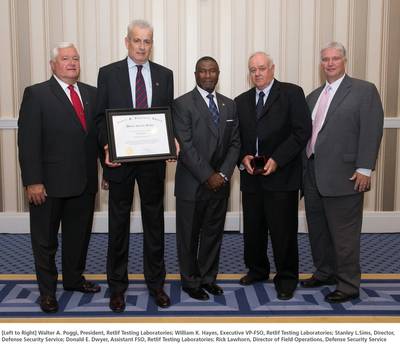 Retlif President Walter Poggi commented, “The Cogswell award criteria focuses the establishment and maintenance of security programs that far exceed basic National Industrial Security Program requirements. We are pleased to be so recognized by the Defense Security Service.”

Established in 1966, the award honors the late Air Force Colonel James S. Cogswell,the first Chief of Industrial Security within the Department of Defense. Colonel Cogswell developed the basic principles of the Industrial Security Program, which emphasize the industry–government partnership to protect classified information. This partnership ultimately ensures the greatest protection for the U.S. warfighter and for our nation’s classified information.

Retlif Vice President Bill Hayes added, “The Cogswell Award selection process is rigorous. Nominees must have a minimum of two consecutive superior industrial security review ratings and demonstrate a sustained degree of excellence and innovation in their overall security program management, implementation and oversight. Retlif is one of only 40 to have received this honor out of over 13,000 defense contractors.”

Retlif, with two locations on Long Island, as well as New Hampshire, North Carolina, Pennsylvania and Washington DC, is celebrating its 35th anniversary in 2014.