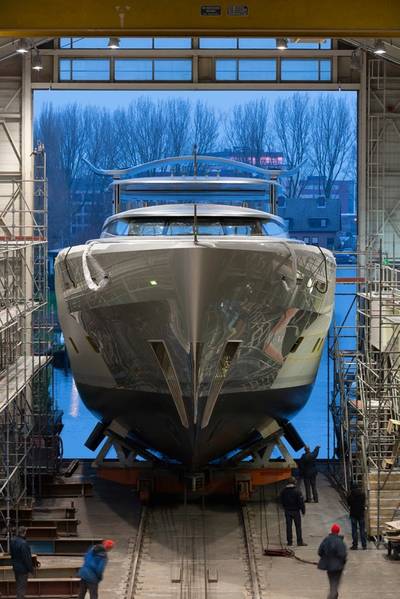 Having previously built a large number of competitive sailing yachts in his native New Zealand and more recently owned a motoryacht from a leading New Zealand yard, Mr Crichton decided the time had come to commission an entirely custom superyacht of the highest possible quality. Hugely influenced by his ideas regarding design aesthetics and the lavish use of glass, Como is felt to be a triumph in every respect.

Featuring a modern bow and whaleback sheer, Como’s exterior design by Dubois Naval Architects reflects the owner’s very specific ideas. The yacht has unprecedentedly large windows in the hull and there is a great deal of glass in the superstructure: the latter is placed on top of the metal rather than being set into it, creating a continuous glass surface. These glazed side panels give spectacular uninterrupted views from the owner’s stateroom.

Como comprises two and a half decks – an exception for Feadship in recent times when most projects have had four or five. The wheelhouse is slightly recessed into the main deck structure, re-emphasising the streamline of the design while creating a gigantic outside deck. This is a wonderful party area, completely covered and surrounded by glass, which can be lowered to facilitate a nice breeze or raised to create a giant terrace protected from the elements.

“We are delighted to make our mark once again in this size range,” commented Feadship director Henk de Vries at the launch of Como. “Feadship is not only about very large superyachts: we also pride ourselves on creating exceptionally well-honed objects on a more human scale. And, like all our yachts, everything has been totally customised to the client’s individual requirements. We have used the very latest technologies and developments to push the window – and the windows – on what is surely the most sophisticated forty-six metre superyacht in the world today.”