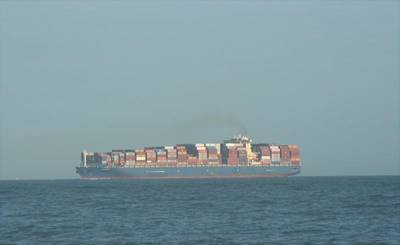 An injured mariner was medevaced from a containership off the coast of Hawaii on Wednesday.

At 4 a.m., Saturday, the captain of the 984-foot Adonis notified Joint Rescue Coordination Center (JRCC) Honolulu watchstanders that a 43-year-old crew member on board suffered a hand injury. A U.S. Coast Guard duty flight surgeon was consulted and recommended a medevac based on the concern that the mariner’s injury could worsen if left untreated.

Due to the vessel’s size and safety concerns for a small-boat transfer, the Malta-flagged containership’s crew was instructed to set course for Oahu where Coast Guard crews would rendezvous upon arrival.

Coast Guard crews conducted the medevac nine miles south of Honolulu, on Wednesday. Weather at the time was reportedly winds of 20 miles per hour and seas up to six feet. A Coast Guard Air Station Barbers Point MH-65 Dolphin helicopter aircrew transported the mariner back to the air station where ambulances were waiting to transport him to Straub Medical Center.

The ailing seafarer was reported to be in stable condition.

“Our aircrews train diligently to ensure they are prepared for this type of situation,” said Lt. Donald Murrow, a rescue pilot at Air Station Barbers Point. “Our aircrews and hoist-capable aircrafts are essential to ensuring mariners reach higher levels of medical care quickly.”

Adonis, which had been sailing from Busan, South Korea toward the Panama Canal, is currently at anchor off the Hawaii coast.