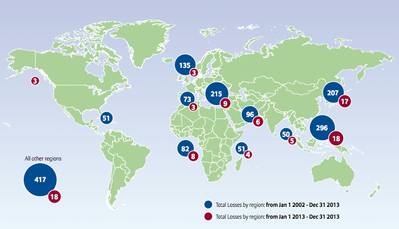 With more than 90% of global trade estimated to be carried by sea, the safety of international shipping vessels and routes is critical to the health of the global economy.

During 2013 there were 94 losses reported worldwide, ensuring the annual total dropped under 100 for only the second time in 12 years, continuing the recent downward trend.

Highlights of the report

More than a third of 2013’s total losses were concentrated in two maritime regions. As in 2012 South China, Indo China, Indonesia and the Philippines was the region with the most losses (18), closely followed by Japan, Korea and North China (17).

The most common cause of losses in 2013, and for the last 12 years, was foundering (sinking or submerging) [69], accounting for almost three quarters of all losses, with bad weather a significant driver.

More than a third of the vessels lost were cargo ships (32) with fishery (14) and bulk carriers (12), the only other vessel types to record double-digit losses.

This year’s figures illustrate that the maritime industry has continued to improve its safety record although the quality of operations varies significantly in different regions, underscoring the need for universal regulations on ship safety to further reduce the risk of casualties and loss of life.

Although the number of piracy attacks declined by over 10% during 2013, hotspots such as Indonesia and the Gulf of Guinea saw their share of global incidents increase. Differences in piracy models continue to create challenges for the maritime community.

(The image shown was sourced by Allianz  from Lloyd’s List Intelligence Casualty Statistics).

The full report can be dowloaded at: http://bit.ly/1gIw706