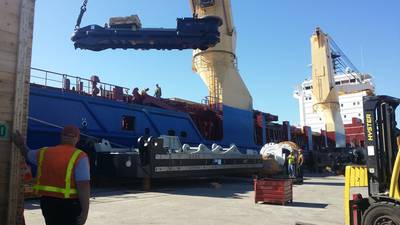 Working Cargo in the Port of Milwaukee

The St. Lawrence Seaway reported that year-to-date cargo shipments of more than 24 million metric tons moved through the system for the period March 28 to September 30 – an increase of nearly 5 percent over September 2013.  U.S. grain continued its upward trend posting a 14.6 percent increase over the same time last year.

“Cargo tonnage moved through the Great Lakes-St. Lawrence Seaway System during the month of September continues to be robust and reflects positively on the economy and the shipping industry,” said Administrator Betty Sutton of the Saint Lawrence Seaway Development Corporation.  “Great Lakes stevedores handled large quantities of steel, grain, sugar, salt, and oversized project cargo carried on more than 200 ships in September. As we head into the busiest time of the shipping season, we anticipate this upward trend in cargo tonnage to continue.”

At the Port of Toledo, the 2014 shipping season has been about building upon their capabilities and preparing the Port to take on new opportunities. At the general cargo dock operated by Midwest Terminals, steel coils and aluminum have been the leading break bulk commodities while new bulk products like iron nuggets and salt from overseas are rounding out the cargo mix. The terminal has been extremely busy this year and the upgraded material handling equipment has played a key role in improving terminal efficiencies and throughput so the dock can continue to accept additional cargo.

“The opening of the new Ironville Terminal, also operated by Midwest, has created capacity for additional bulk material handling,” said Joe Cappel, Director of Cargo Development for the Port Authority. “Shipments across nearly all product categories have shown improvement compared to 2013,” Cappel added. “With a strong grain harvest and continued demand for construction aggregates and use of our London Metal Exchange facilities, we expect this positive trend to continue through the end of the year.”

“The Port of Milwaukee shipped an enormous mining shovel to West Africa in September. Southeastern Wisconsin is a center of mining equipment manufacturing as both Joy Global’s P&H Mining division and Caterpillar Global Mining are headquartered near Milwaukee’s Port,” said Paul Vornholt, Operations and Trade Director. “The Seaway provides an ideal route to deliver these oversized, high-value products to mines around the world.”

“This month’s cargo shipments represent a roughly 30 percent increase over what we handled last September and is a strong indicator of the improving economy in Southeast Michigan,” said John Loftus, Executive Director of the Detroit/Wayne County Port Authority.  “The Port Authority takes very seriously its role as a facilitator to industry in the Detroit/Wayne County area, and we’re proud of the growth our constituent businesses are enjoying.” Stevedores at the Nicholson Terminal and Dock Company handled 30,000 net tons of steel coils and steel products imported from the UK, Canada, Germany and Turkey to be used by the automotive and construction sectors.

“Heading into October here at the Head of the Lakes, we expect to see continued gains on the deficit experienced at the start of the season,” said Vanta Coda, Duluth Seaway Port Authority executive director. “Iron ore shipments have rebounded significantly, the early autumn grain lineup looks favorable, and we’re expecting above average movements of general cargo at our Clure Public Marine Terminal. Though we see a liability in supply chains with rail service still struggling, momentum all around is generally positive.”

“It appears both domestic and international shipments are continuing to grow at better than forecasted levels,” said Rick Heimann, port director for the Port of Indiana-Burns Harbor. “We were glad to see our first shipment of windmill blades and towers in years, after having as many as 16 wind shipments in one season during 2010. Salt deliveries for the upcoming winter are already in full swing. Looking ahead, several port companies are expecting a significant increase in ocean shipments compared to previous projections, primarily of semi-finished steel. We’ve also seen several more vessels added to the upcoming harbor schedule that were not on the horizon just 60 to 90 days ago.”

“Aluminum shipments continue to come into the Port from the Aluminerie Alouette facility in Sept-Iles, Quebec,” said Zelko Kirincich, Executive Director of the Port of Oswego Authority. “The Seaway and the Port play critical roles in ensuring that Novelis can meet its production goals to manufacture aluminum sheets for the Ford automotive industry.” Nearly 8,300 metric tons of aluminum ingots came into the Port last month on McKeil Marine barges, and that number is forecasted to increase in 2015 with the completion of the third Novelis finishing production line.