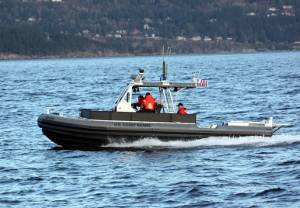 Kvichak Marine Industries, Inc., of Seattle, Wash., was recently awarded a five year contract by the U.S. Coast Guard for the construction of up to 80 each Transportable Port Security Boats (TPSB).   The all-aluminum vessels are operated by a crew of four and include shock mitigating seats to minimize crew fatigue on extended missions.   Ballistic Armor Protection and up to four mounted weapons provide increased mission capability and crew safety during tactical operations.  The 32.8-ft vessels will be replacing the USCG’s current aging fleet of smaller, outboard powered fiberglass boats.

Powered by twin Yanmar 315 hp diesel engines with Bravo 1-XR outdrives the TPSB will provide security, maritime law enforcement and search and rescue operations  in coast areas worldwide.   The TPSB can maneuver in as little as two feet of water and can operate safely in eight-ft seas and up to 30 knots of wind.

Current orders have deliveries beginning in August with 30 units required by January 2012.