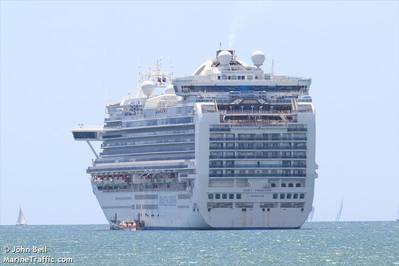 A cruise ship linked to a third of Australia’s coronavirus deaths has left the country after a month docked in local waters, the authorities said on Friday, as an emergency cabinet meeting was expected to ease some social distancing measures.

The Ruby Princess, owned by Carnival Corp, has become a flashpoint of public anger after being allowed to unload thousands of passengers in Sydney without health checks on March 19.

Hundreds of its passengers later tested positive to COVID-19, about 10% of the country’s roughly 6,600 infections, and a third of the country’s 77 coronavirus deaths have been traced to the ship.

Separate criminal, coronial and government investigations have been launched to find out how the ship’s operators were allowed to let coronavirus patients disembark.

The ship left Australia early on Friday with about 500 crew members on board, after other crew members had been repatriated, New South Wales police commissioner Mick Fuller told reporters.

“NSW Health will maintain contact with the ship’s doctor, whilst they are in Australian waters,” Fuller said.

“This was all about minimizing the risk to the crew members, and the health advice was that yesterday, the ship was the lowest risk that we’ve seen since it landed,” he added.

He did not say where the ship was headed.

An emergency coronavirus cabinet of Australian federal and state leaders was scheduled to meet on Friday where the group was expected to discuss a timeline for an easing of restrictions on movement intended to slow the spread of the illness.

Australia has avoided the high numbers of coronavirus casualties of other countries but the federal government has said restrictions that ban most non-essential public movement will remain for another three weeks in an effort to “suppress” the virus.

However, local media reports have said the federal government may urge state governments, which run the schools, to speed a up a return to classroom attendance. The federal government has urged schools to stay open due to medical advice that children are a low transmission risk, but some states have urged children to stay home due to teacher safety concerns.

Carnival Corp’s Princess Cruises on Thursday extended the suspension of some of its voyages in Australia, Canada and Taiwan…