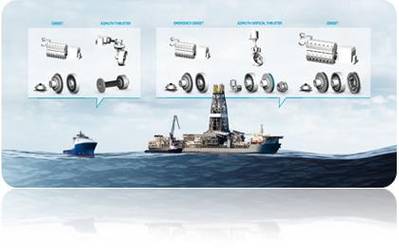 The focus of this year's product and performance presentation by VULKAN Couplings at the Sea Japan in Tokyo are the specially integrated marine drive solutions for offshore ships. The coupling manufacturer based in Herne, Germany, has been supplying in particular the growing Asian and South-American market with drive line components for many years.

VULKAN Couplings have become internationally known for their drive solutions for drill ships. The latest, successful project was the equipment of six drill ships, built by the Estaleiro Enseada do Paraguacu shipyard for the Brazilian Charterer PETROBAS.  VULKAN Couplings supplied the highly flexible couplings for the CATERPILLAR MaK 16CM32 Gensets and the electric motors CAT 3516 B, as well as the torsionally rigid couplings and brakes for the Kawasaki steering propeller KST-320LF.

At the Sea Japan 2014 VULKAN Couplings present the complete portfolio of these demanding diesel-electric high performance drives for work boats: flexible and highly flexible torsional couplings combined with elastic mounts for engines ensure vibration reduction and dampening of the propeller excitation. VULKAN Couplings has developed VULKARDAN G especially for generators and Z-drives of the mentioned offshore-application.  The coupling can both be used in the SAE engine drive (size 54-62) and in the non-SAE engine drive (size 84). The torque range of this coupling is 8.00 kNm up to 63.00 kNm. The coupling has been developed for free standing systems, with the possibility to extend the elastomer without displacing the connected units. Very good values for the power loss of the coupling are produced thanks to the element design.  The system is also optimized in terms of torsional vibrations by the use of a new elastomer with a corresponding torsional stiffness CTdyn, which implies that damaging resonances are eliminated from the operating speed range and effects on engine control are prevented.

VULKAN Couplings also present the RATO R+ from the ACOTEC series.  The RATO R+ coupling has been especially designed for use in installations requiring a high level of torsional flexibility and misalignment capacity and lowest possible rotating inertia.  The area of application is primarily in high-speed main/PTO systems driven by a Diesel engine or electric motor.  With this VULKAN Couplings are joining the trend of increasingly efficient and high speed engines, which is establishing itself worldwide.

The further development of RATO R+ was focused on the centerpiece of the coupling: the elastomer.  Innovative compound research and highly specialized vulcanization technology facilitated the development of an elastomer with considerably higher power density. The ACOTEC compound distinguishes itself from other conventionally used materials not only through the enhanced tensile and tear strength and increased ultimate elongation, but also through a high thermal resistance and lesser ageing effects.  The new ACOTEC couplings also include an additional, significant, commercial advantage as, with the same performance requirements, a smaller RATO R+ coupling can be used rather than the Standard RATO R.