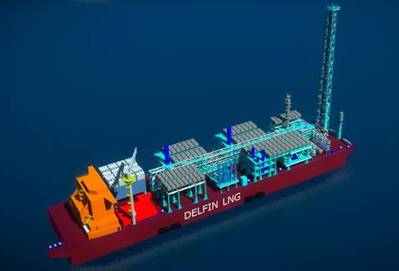 "This is the best macro-environment that the LNG business has ever seen," Delfin Chief Executive Dudley Poston told Reuters this week, noting he was "very confident" the company would make FID this year.

Delfin is one of a dozen or so North American LNG export projects that delayed decisions to start construction in 2020 and 2021 in part because coronavirus demand destruction made customers unwilling to sign enough long-term deals needed to finance the multibillion-dollar facilities.

"We're now seeing the most sustainable interest from LNG buyers ... that we've seen in years and Delfin only needs two to three buyers," Poston said.

"We're already in contractual discussions for more than we need for the first vessel. We just need to get a couple of those guys across the line."

Delfin's project would use existing offshore pipelines to supply gas to up to four vessels that could each produce about 3.5 million tonnes per annum (MTPA) of LNG.

Poston said each vessel would cost about $2 billion with the first expected to enter service around 2026, four years after the FID.

After the first FID, Poston said Delfin would start working on its Avocet project, which would add two more 3.5-MTPA liquefaction vessels.