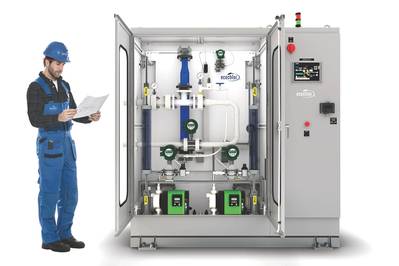 As the U.S. Coast Guard tightens its BWTS compliance rules and more systems are approved, there are still many unanswered questions for operators finally looking to comply.

It’s no secret among marine stakeholders that ballast water regulations remain a top concern at the start of 2018, and a confusing one, to say the least. Hence, if someone offers to sell you a clear, concise and complete ballast water instruction manual, move that email over to your spam filter right away. However, if you get a similar offer from the Mariners’ Department of Beneficial Sorcery, go ahead and click on that one – it’ll likely be easier to understand, and maybe even dependable.

The foregoing, of course, is a bit of an exaggeration, but not really much of a stretch. After all, despite years of policy development, 2018 holds real directives and mandates for ballast water management systems (BWMS). The larger background and context for these directives, however, remains unsettled, making decisions about investments due today appear questionable and hard to evaluate. The cost to retrofit vessels with BW treatment systems is estimated to be between $1 and $5 million per vessel, according to the International Chamber of Shipping.

Too Many Cooks in the Kitchen?
In this case, however, two heads are not necessarily better than one. It’s admirable that the U.S. Coast Guard and EPA are working together to advance ballast water treatment. Unease moves in quickly though as two complex regulatory programs work to build ironclad frameworks in the same berth.

At the national level, ballast water regulations are in play within three broad venues: EPA, the Coast Guard and Congress. Of course, there are important sub-venues – the States, for example, or the Great Lakes, or concerns within particular rivers, such as the Hudson. And, of course, there’s the international level – particularly the International Maritime Organization (IMO) agreement established in 2004, but on hold until ratification by a threshold number of countries, which happened in September 2016, when Finland signed the IMO agreement starting a 12-month activation countdown to September 2017. And, consider that the IMO has backed off of its hard deadline for compliance while the United States, inexplicably, did not.

Moreover, there is even less clarity for U.S. mariners because the United States did not sign the IMO agreement. Again, consider the particular challenges for Great Lakes shippers: the United States is not an IMO signatory, but Canada is. And, it’s not clear how this Great Lakes internationalism will play out. The Coast Guard writes that “the Coast Guard, EPA, and Transport Canada maintain an ongoing dialogue to identify and resolve differences in their respective regulatory requirements to manage ballast water and other potentially harmful discharges from vessels.” Just how that ongoing dialogue is progressing is hard to determine.

The Coast Guard Weighs In
The U.S. Coast Guard (USCG) introduced its ballast water regulations in March 2012, effective June 21, 2012. The standard established an allowable concentration of living organisms in ships’ ballast water discharged into waters of the U.S. This authority stems from the National Invasive Species Act (NISA), intended to prevent invasive species from entering inland waters through ships’ ballast.

The CG’s 2012 rule established requirements for “type approval” of ballast water management systems (BWMS). The 2012 standards aligned with the 2004 IMO Ballast Water Management Convention. However, the standards are not the same. The main difference between the Coast Guard regulations and the IMO is in the equipment testing and verification protocols.

The USCG says that the time is ready to stop planning and move to implementation, despite industry concerns about efficacy and cost. “The Coast Guard is in compliance mode,” the Guard announced in an October 2017 summary presentation. An integral part of the USCG’s program is its approval of treatment technologies and laboratories. As this is written, there are six “type approved” ballast treatment systems and five approved independent ballast water testing labs. And, with certain conditions, vessels can also use foreign systems to reach compliance.

In a big way, operators have largely dealt with compliance by seeking deadline extensions – over 12,000 extensions have been granted. But that regulatory largess is reaching its limit. Now that type-approved BWMS are available, a vessel owner or operator seeking an extension needs an “explicit statement supported by documentary evidence (e.g., a delay in commercial availability) that installation of the type approved system is not possible for purposes of compliance with the regulatory implementation schedule,” according to a CG “Ballast Water Frequently Asked Questions” document. This document points out “there are other ways that vessels can comply with U.S. BWM regulations,” including:

In Cleveland, for example, there are three potential facilities, the closest is about 2 miles from Lake Erie docks. But that facility has no capacity for the 16 million gallons of ballast discharged from a single 1000-foot vessel (within about 8 to 12 hours). If it could work, Rayburn calculates that POTW service at Cleveland would cost $167,000 per discharge, or about $171 million annually for all LCA members.

The 2016 singular cost is worth a closer look: it increases to $263,000 in 2022 because of in-place rate increases. Conversely, in Wisconsin, the POTW for the City of Superior, on Lake Superior, has available capacity – but the plant is designed for 4 million gallons/day.

Rayburn estimated it would cost $80,000 to use Cleveland’s potable water. But operationally potable water presents issues: the ballast system first has to be cleaned and then kept clean, isolated. A ship could not adjust for trim during its voyage because that would be a contaminating move, requiring treatment at discharge. Potable water is allowed, Rayburn noted, but “it is not really a practical option for any vessel.”

Meanwhile, the Coast Guard is actively trying to keep the regulated community abreast of ballast water management developments. At the end of November, RADM John Nadeau, assistant commandant for prevention policy, started a 5 part blog on the USCG’s Maritime Commons website. The series concludes with a helpful, updated FAQ page. But, the blog series concludes with a reference for operators to be on the lookout, in late 2017, for a new NVIC (Navigation and Vessel Inspection Circular) for field units and industry dealing with ballast compliance. The motto for ballast water?: semper reprehendo retro or “always check back.”

As the USCG moves to implementation, so too is the US EPA preparing critical next moves regarding ballast water. Importantly, though, EPA’s work is within a different regulatory framework – the pollutant discharge program within the Clean Water Act, which regulates vessels as a “point source,” that is, a singular, identifiable source of pollution. (In contrast with a “non-point source” – a roadway, for example, or runoff from a contaminated but mostly undeveloped site, portions of an old landfill, for example.)

The EPA
In 2008, after decades of exempting ballast water as incidental to normal operations, EPA developed its first five-year “vessel general permit,” or VGP, a move forced on the Agency by lawsuits from environmental groups. The VGP has had a contentious history. The 2008 permit was challenged as inadequate regarding ballast water.

In 2013, VGP 2.0 was developed. Again, lawsuits: the Natural Resources Defense Council, Northwest Environmental Advocates and other environmental groups sued, charging that EPA acted “arbitrarily and capriciously” on a range of ballast issues, including using the IMO standard for certain effluent limits, not considering onshore treatment, just shipboard treatment, that it excluded numeric effluent limits for viruses and exempting (Great Lakes) Lakers built before 2009 from certain requirements.

In October 2015, the United States Court of Appeals for the Second Circuit ruled in favor of the petitioners, finding that, indeed, EPA did act capriciously and arbitrarily. VGP 2.0 was remanded “to EPA for proceedings consistent with this opinion.” However, the Court allowed the 2013 VGP to remain in place until EPA issued a new VGP.

Fast forward to 2018, five years later, and the imminent release of VGP 3.0, expected as a draft. The new permit will need to address and correct a range of substantive issues. The Court commented extensively on how EPA’s evaluation of on-shore treatment was inadequate. It will be interesting to see how EPA’s proposals might expand in VGP 3.0 considering LCA’s assessment of on-shore possibilities. Hopefully, these will be changes in coordination with the policies and demands set by the Coast Guard, changes that will most assuredly be reviewed under the microscope by all parties involved and interested.

The Advent of CVIDA
Finally, it’s important to mention the third major policy arena for ballast water regulations. In fact, it should be considered the most important arena: the U.S. Congress, the theoretical boss of the EPA and the Coast Guard. Unfortunately, in 2017, legislative work on ballast issues never really left the dock. Therefore, as 2018 starts, Congress’ work is dormant, so far unproductive, although this legislation could reappear in 2018.

S 168 and HR 1154 – the “Commercial Vessel Incidental Discharge Acts” – are companion bills introduced in the Senate and House in January and February 2017. Many commercial stakeholders liked the CVIDA bills. Specifically, they liked that the U.S. Coast Guard would officially become the lead agency on ballast discharges. And, the prospect of uniform program management, replacing the multiple cooks now in the policy kitchen, was equally appealing. They viewed it as protective: standards would be reviewed every 10 years, states could seek more frequent reviews depending on real-world data and conditions, and, critically, once a vessel owner spent the money on a U.S. Coast Guard approved ballast treatment system, there would be assurances that the investment was sound, that the system was in compliance from the Great Lakes to New Orleans.

As noted, the bills never received hearings. In the Senate, S. 168 was folded into the Coast Guard reauthorization bill – S 1129. Despite its much broader scope, that bill, too, did not draw legislators’ attention. For ballast water compliance, mariners will have to take some steps in 2018. Caution is the wise course.


(As published in the April 2018 edition of Marine News)